The huge empty space at the top of Walthamstow high street can't be missed. It appeared the year before the Art Trail started and was originally supposed to be filled with a brand new library, cinema, shops and housing while the old library was to become our new Arts Centre.

Nothing much has happened to this 'Arcade' site since except weeds and Alberto Duman's '2005 Art Trail spoof 'Guggenheim Walthamstow'.

This year local campaigners, Fight The Height are taking part in the Art Trail for the first time and sustaining focus on the empty site with a mass participation postcard project.

This Space Has Been Left Unintentionally Blank is a mass participation project using postcards of an aerial map of central Walthamstow. A blank space represents the Arcade site (on the corner of Hoe Street and the High Street) and participants are encouraged to fill it in with their own unique vision for the site.

Thousands of postcards have been distributed via shops, cafes, schools, libraries, letterboxes and more. Responses will be enlarged and displayed in the Art Trail (at Ye Olde Rose & Crown Theatre Pub) and visitors will be encouraged to take part by filling in postcards themselves and adding them to the work.

2. Could you have done this work anywhere, or is it specific to E17? Did you respond to this year’s Art Trail theme ‘At Home’?
The work is very much about a specific site in Walthamstow, which is our home. That said, there are many places around the country with similar disused sites and councils that lack the vision to make good use of them, so we daresay similar projects could happen elsewhere.

3. Have you participated in the E17 Art Trail before?
No, this is our first time.

4. How does your work this year relate to your previous artistic practice?

Some participants are seven-year-olds, others are established artists. Some have created detailed designs, others have just written a word to represent their idea. Some entries are serious, others more tongue in cheek. We can only assume that this will be the first time that many participants in the postcard project have had their work exhibited.

5. What challenges (if any) do you face in realising this work?

As campaign organisers we first had to summon the courage to take part, because we don’t define ourselves as artists and are instead hoping that participants become the artists. Then of course we needed to print thousands of postcards but didn’t have any money, so we relied on generous donations from local residents on the Fight The Height email list who thought it was a good idea. Likewise, it took dozens of volunteers to distribute the postcards at venues throughout E17, enlarge the postcards, etc. Oh and we’d like to thank Ye Olde Rose & Crown Theatre Pub for being so supportive, receiving the postcards for us as well as giving us exhibition space.

On the one hand, the project is for local residents to feel inspired about the potential for the site. As a community we have some great ideas for what Walthamstow needs. But we’ve been disenfranchised for too long because we are never consulted. Please take part (send us your postcard to arrive by Friday 28th August – for a list of venues stocking the postcards see http://www.fighttheheight.co.uk/) or come see us at the Art Trail, be inspired and contribute your own postcard there and then.

On the other hand, it’s also aimed at local councillors and council officers. We want to show them the breadth of exciting ideas that the community has to offer and encourage them to genuinely consult us on future plans.

Ironically, after years of Arcade site being boarded up, the council recently tarmacked over a large triangular area and opened it to the public in July. The blank space is a vast improvement (albeit one that’s probably a cynical ploy to disguise the lack of real progress in the run-up to next May’s local elections…). The council is consulting with residents on temporary uses that could take place on the triangle, but by tarmacking it has limited the possibilies. And the council shows no intention of consulting residents on its long-term plans for the site (they’re currently talking about spending £35m of public money on a swimming pool with no parking and a tower block in the middle of a property crash). We will therefore be ensuring that all entries to the postcard project are seen by the right people at the Town Hall too.

7. As well as being an artist what else do you do?

Fight The Height is a collective of local residents. Our day jobs are as varied as the day is long. Most of us are involved in other local community groups too.

8. What is your favourite place in E17?
Screen one of the EMD (formerly Granada) cinema on Hoe Street is the most spectacular place in E17 (the Greek Theatre at the Walthamstow Girls’ School, with a picnic, watching Shakespeare on a summer’s night comes a close second). Which is why it’s madness that the council seems hell-bent on ignoring the EMD’s fate. It’s even considering building a soulless multiplex as part of its development on the Arcade site next door. Please visit http://www.mcguffin.org.uk/mailinglist/ to join the email list to help save the cinema. And of course visit http://www.fighttheheight.co.uk/ to join our email list and oppose tower block plans in favour of real community consultation. 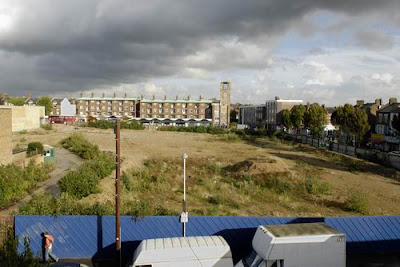