It is an absolute tragedy how little I am seeing of the Art Trail this year. Have concluded that I vastly prefer being unemployed, as I was last year, to being over-employed as I am this year. Two major projects with October deadlines are calamitously coinciding which means I am even working weekends at the moment. As a consequence, I have only managed to see the new Image 17 (plus some guests) show and Jason Hawkridge’s additions to the Courtyard off the High Street so far.

His paintings completely transform the space - the brilliance of the colours and precision of the lines look amazing against the Victorian brickwork. Apparently he is going to try and get a live band playing in there at some point during the trail so worth keeping an eye on 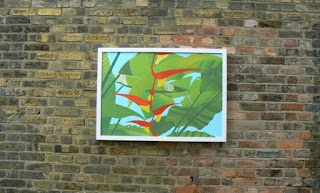 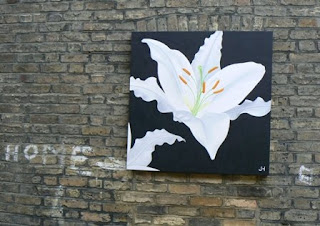 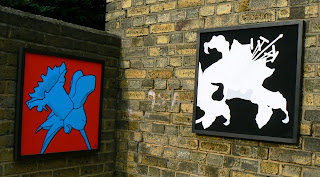 The Image 17 gang have put on an amazing show again.  The Walthamstow Tapestry (After Grayson Perry) is in a huge space on top of Tesco Metro opposite Stow Central station. Apparently it’s the new offices of Strettons estate agents but they haven’t moved in yet so came to an arrangement with Image 17 about using the space during the Art Trail. It’s a great space. Big and light and the collection of images arranged meticulously over the length of the room looks great. All of the images are related in some way to Walthamstow and the incredibly arranged mix  (how long did that take?) with its own little panoramic map  is in turn moving, surprising, funny, sobering and brilliant. 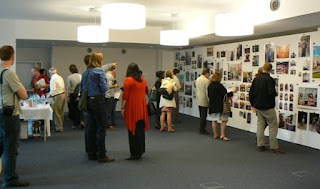 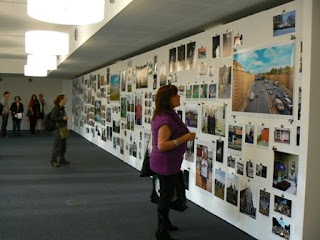 Can’t Strettons just donate the space to the Art Trail and rest assured that they will all be richly rewarded in the next life?

I happened to turn up on Saturday at 6.00 just in time for Redemption which is always a good time to arrive.  Redemption in case you haven’t heard, is a very tasty beer from a micro brewery in Tottenham. Yes it's the Tottenham Brew Crew! I am a big fan of any beer that isn’t lager and I thought it was really good. So hopefully you will be able to buy a pint of Redemption in a pub near you very soon. 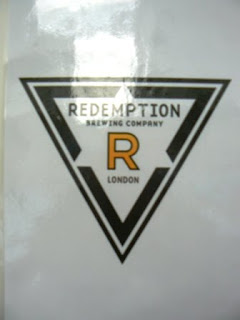 Hi Valerie, I went to both venues yesterday too.... shame didn't bump into you!

I do love how the little hidden courtyard came to life with colour. I had the fantastic luck of meeting Katherine Green yesterday whilst at the Tapestry venue, and was chuffed to meet someone whose photography shares the same values as mine... I do like how she captured the take-away staff, trapped in their familiar surroundings, yet foreign to what goes on outside it.

Hi fabien
sorry i haven't made it yet. have hardley seen anything this year. will try next weekend.