With three weeks to go, Duncan Holmes prepares for the Trail 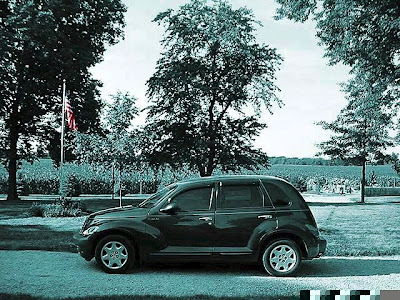 In the lead-up to the Trail, Duncan Holmes is blogging about preparing for his exhibition of photographs and drawings of the American Midwest. Here's the second installment.
Three weeks to go before the Art Trail opens, four until my own show opens (it's number nine on the list), but I've been hugely distracted by the riots, glued to the news whenever I was awake and not working, a bit like having a toothache and not being able to forget about it. Walthamstow got off lightly compared with many parts of London but that is not really a surprise, since it doesn't have the levels of deprivation that Tottenham has and there are few shops worth looting. But back to the subject of preparations.
In my last blog entry I was looking at the idea of contrasting similar scenes in the UK and in America. That idea was soon laid to rest. I put a couple of dozen images together, printed them out and tried arranging them in pairs, and immediately realised something about the combination simply offended my sense of proper categories. I just didn't like seeing the images together, the juxtapositions seemed facile and they told a confusing story. All photographs tell a story, however obscure the details, and perhaps the less muddled that is the better.
So it's back to plan A, which is to show a straightforward record of the changing way I've recorded my US visits, which go back to my first visit in 2002. Flying into Chicago, my first chance to step out of doors was at the bus stop in Gary, Indiana - a particularly bad suburb of the city - and knowing something about botany, I was please to find that I didn't recognise a single species among the weeds and flowers growing by the roadside. So my first impressions were about quite obvious differences, while more recently I'd hope the photographs are less concerned with contrasts and more with capturing the qualities of different places.
This monochrome photo is from that first visit. It's rather more photoshopped than most because it wasn't clear enough as it came out on my first digital camera, a Sony Cybershot that would look very primitive today. Even so I like it as an image, the typical rural home with a neat lawn and the flag flying discreetly. More next week...