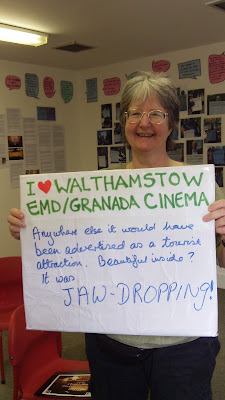 The EMD Granada cinema has been a big part of the lives of so many people over the last 80 years. This exhibition captures those memories through fascinating video clips, photos, drawings and stories. Here's a report of their first weekend exhibiting on the Trail.

Our first weekend was brilliant! Over our two days at the Mill, 198 people came to see the People's History. Very very pleased. Loads of people watched the film more than once and four of the people in the film came along to see it and got to see people's reactions to it. 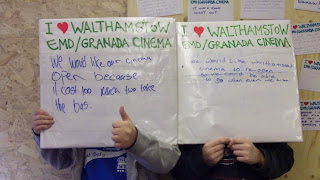 Lots of people popped in briefly but a lot of people stayed quite a while and read all the stories and looked at all the photos and sketches.
A particular hit was Richard's compilation of the big names who did gigs at the Granada. The postcards were popular too. We ended up with about 30 of those and a few people wrote out a placard and posed with it.
Two representatives of a local cooperative of social history archivists came to see the People's History to talk to us about the material. 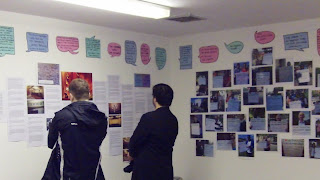 The exhibition was on the itinerary of an Art Trail walking tour so we had at least one biggish group plus a few smaller groups and families. At least three times the room was full to capacity but most of the time it was a nice steady flow. 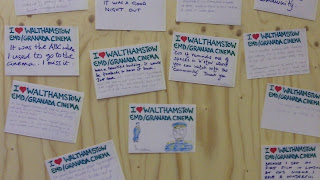 Even on Sunday morning there was a pretty good flow of people and it took off about 12 o'clock for the rest of the day. Saturday had 112 and Sunday had 86 people. Brilliant! And the lovely atmosphere at The Mill added to that special alchemy that happens in Walthamstow when that creative community hubbub kicks in.
So we're looking forward to taking the exhibition to Daisy's cafe at 176 Hoe Street for our second weekend.