Only a month left till the trail starts and all the artists are stepping preparations to get their exhibit or event done for the trail. Duncan Holmes will be exhibiting in an open house on Clifton Avenue. Visitors are usually hesitant with open house exhibitions, but everyone who has one in the Trail will be welcoming you with open arms and a cup of tea. Duncan gives us a little insight into his project and his preparation: 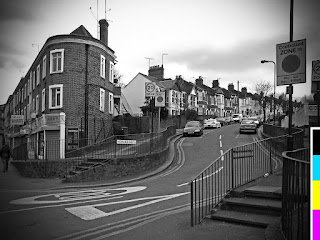 Just a month to go and as always, procrastination is still getting the better of my increasing sense of urgency. This will be my third year exhibiting photographs: images of London in the first year, and the American Midwest last year. This year's project has a more local focus. I've been assiduously collecting images of buildings around Walthamstow for the past year and as the collection builds up, seeing what they amount to overall and what I should do with them. In the end, of course they speak for themselves and there's no need to do anything clever to make associations - but I still have a folder of raw images to process, and there are still some places I've meant to photograph and haven't yet, or photographed in rainy February weather and know they will look better photographed in rainy August weather.

Mainly I've been concentrating on individual buildings, looking at what there is to see if you step back from the usual street-level focus. Keeping away (mainly) from the Walthamstow clichés there are different kinds of interest and beauty to be found. According to the Telegraph, the new William Morris gallery is " like a beacon of beauty amid the local asphalt-benighted urban sprawl". But in reality Walthamstow has quite a pleasing urban texture, streets on a proper human scale with a mixture of old and new buildings. Unlike many outer London centres it isn't ruined by huge roads and gigantic housing projects. The High Street isn't a wasteland of charity shops and fast food chains, thanks to the famous street market and the way the Mall and Sainsburys have kept the High Street the commercial centre of the area. So I suppose this exhibition is to encourage a positive view of an area that many Londoners dismiss as down-at-heel and tawdry.