Duncan Holmes project Walthamstow in Perspective is almost done, but not finished as he is always finding new angles to approach his subject: 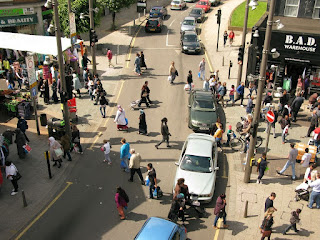 I've just about finished with photographing places in Walthamstow for this year's exhibition (no. 11 in the Trail Guide) - in fact I can hardly face the idea of taking any more photos. Last weekend though, a moment of inspiration led me to the rooftop car park at Sainsburys, where you can get an excellent aerial view of the pedestrian crossing half-way up the market.

The photographs for the show focus quite heavily on buildings, since it's about the architecture of the area, although not in the ghost-town way that architectural photographers seem to like. Even so, I wanted to have something in the show with actual movement.

On a sunny Saturday morning, the pedestrian crossing is the perfect place to capture a sense of movement: a well defined space with a constant flow of people and cars in both directions. People gather at the roadside, lined up along the kerb, then pour across the road the moment the traffic stops for the lights, or the cars just grind to a halt and people dodge in between. It never stops while the market is open.

I set my camera to shoot one frame per second, and took the resulting 500 images home to work out how to combine them into a reasonably smooth animation. I suppose video would have worked but I wanted a stop-motion effect, so you can follow individual characters across the screen in slow motion, but it's not too obvious. Nothing particularly exciting happened, but the intersecting paths of cars and people are sort of fascinating. It seems to work.