Taking my starting point as The Artworks book launch of Michael Shann the poet's collaboration with print maker Kirsten Schmidt, I endeavoured to get around as much as I could on this clammy and damp Sunday.

Michael's latest book, entitled 'Walthamstow' is a succinct and pithy series of meditations of the varied delights of Walthamstow and surrounding areas. He opened with 'Kingfisher', reminding the audience in his introduction that his poetry can be seen if you get down on. your hands and knees (always the best way to see poetry...) at Walthamstow Central Station. It's embedded in the concrete there, as is the heart of his beautiful and succinct poetry. He can be seen below, with Kirsten Schmidt, whose apposite and equally beautiful prints accompany Michael's text. I must confess to a post 11am Pimms that was proffered by Kirsten...well, my five a day was also in the glass in fruit form! Michael read with a wry humour and gentle presence and his poetry is both a credit to him and his adopted home of Walthamstow. As a recent incomer myself, I appreciated the visual aspect of his work and of Kirsten's characterful prints. 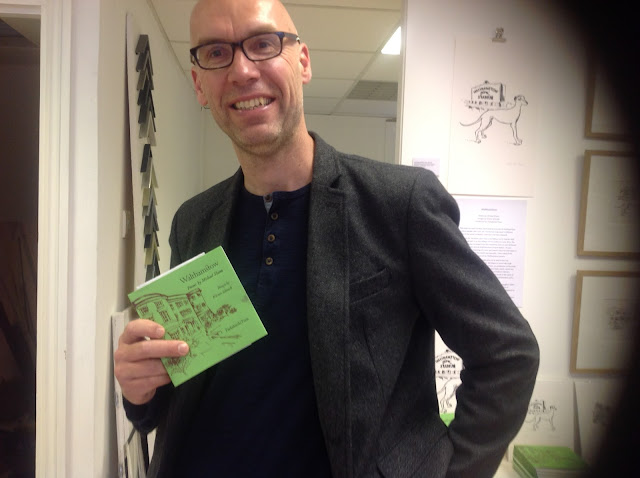 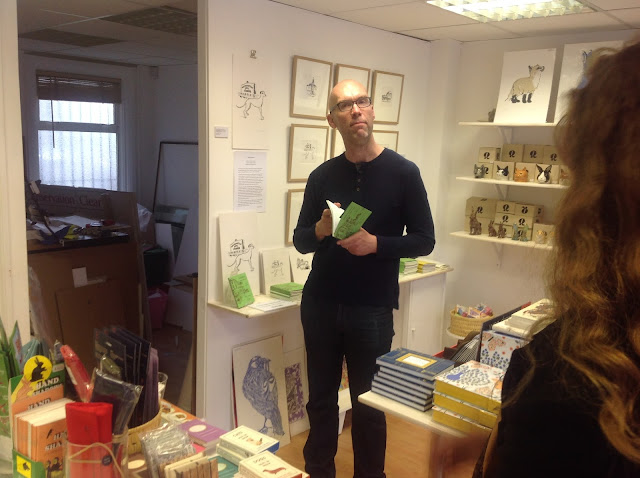 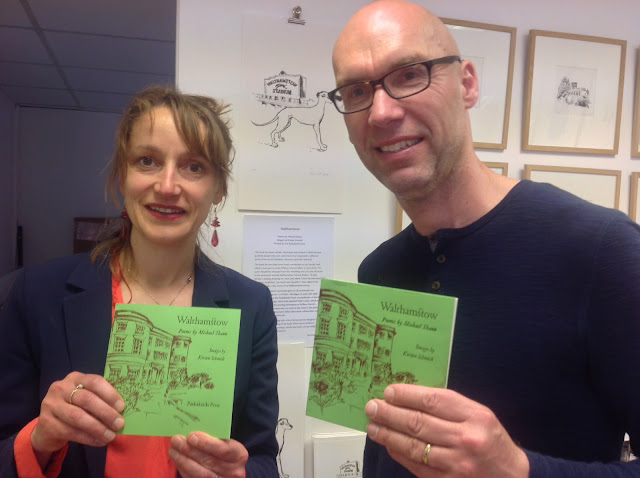 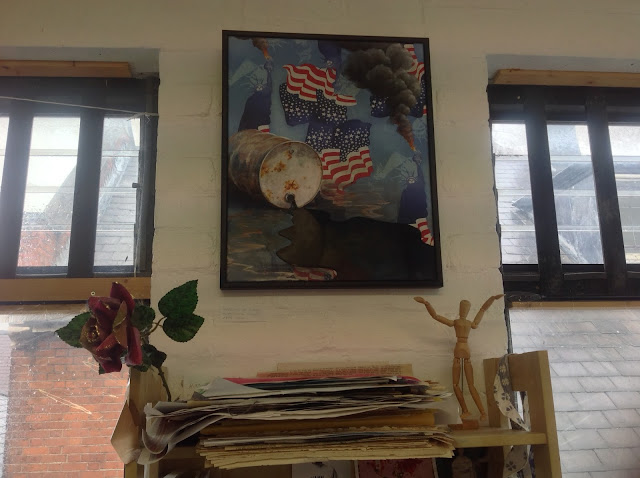 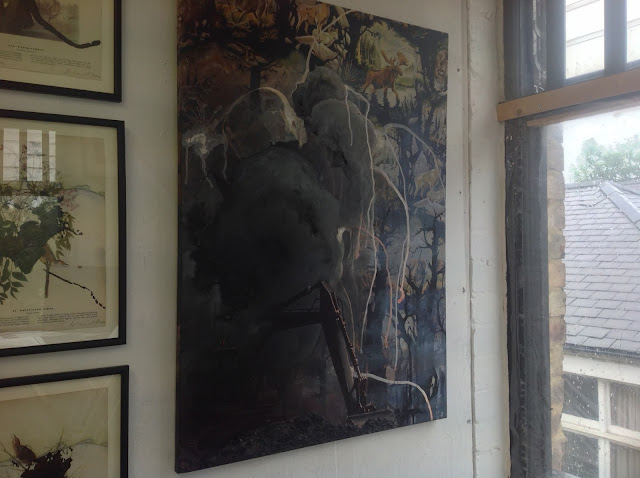 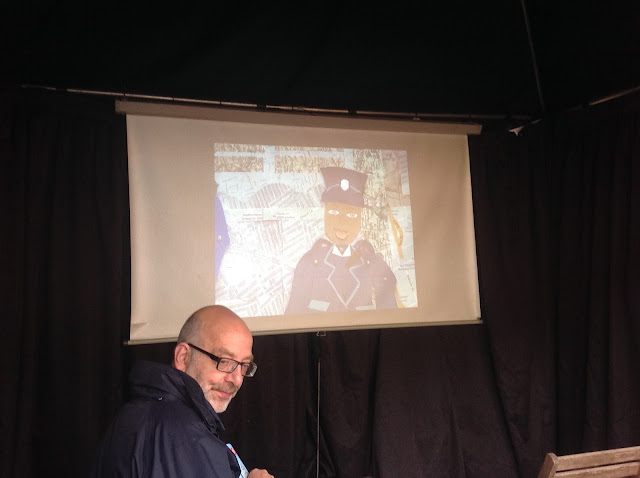 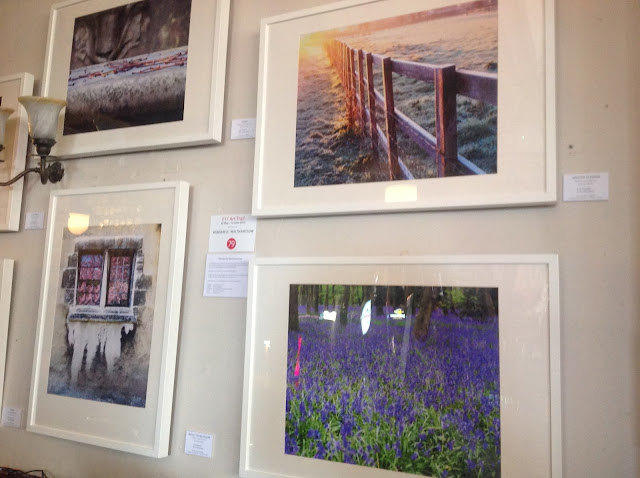 
After attending Michael and Kirsten' book launch, I spoke to Tim Fishlock, whose arresting and engaging artwork I enjoyed as much as I did conversing with him about his process. I particularly liked the fact that his "Oddly Head' (a clever pun on old publishing house The Bodley Head) work explicitly mentioned 'being IV drip fed pop art to a soundtrack of John Cooper Clarke' "Absolutely Chickentown' As humble a man as his works are electric and hyper-kinetic, he is a artist worth seeing and indeed meeting. I left feeling uplifted on this overcast Sunday.


Hidden treasures are an intrinsic feature of the Art Trail and at Greenleaf Road, via an alleyway I found the delights of Paekakariki Press and Mitre Studios. Paekakariki Press is the brainchild of renaissance man Matt McKenzie, a native of New Zealand now resident in our fair borough. I had the signal pleasure of a guided tour of his impressive premises by the man himself and his 'printing devil' Kim Vousden. Kim is primarily a printmaker and working artist with an interest in print and is learning to cast type using Matt's amazing array of vintage built-to-last equipment. It was heartening to see such traditional artisanism in a world currently obsessed with ephemeral trends and indeed hardware. A steampunk reference was the typecasting machine Matt uses which is hooked up to a PC. Both Matt and Kim were extremely generous with their time and I appreciated their indulgence of a gawping tourist like myself. Matt also gifted me a lovely handprinted card with my name on it. He gave me the translation of Paekakariki which means 'the poaching place of the little green parrot. I left with a new-found interest in the world of print and 'real' type as it were, thanks to both Kim and Matt's concise explanations of the art.

Mitre Studios was a further revelation, housing five artists with very different and interesting practises. I was greeting by the cheerful and welcoming presence of Martin Adams, who gave me a tour and offered me brownies and strawberries. I am struck at the sheer goodwill and aforementioned generosity of the Art Trails venues I've visited thus far. Martin's own work on display includes a humorous and unofficial history of The Bauhaus movement and is as engaging as the man himself. Della Rees' sculptures featured the domestic and community and I found them to be imbued with a heartfelt and intensely human quality at the heart of them, especially the one of the infant in the pushchair. I spoke to Alke Schmidt about her beautiful and apocalyptic paintings which are concerned with looming and all-too-real environmental catastrophes as well as the history and exploitation of textile workers. This struck a chord with me coming from a city built and predicated on textiles. Alke was enthusiastic and erudite and it was a pleasure to converse with both Martin and her about their work as well as the Art Trail. Forest poet Mo Gallacio dropped at the same time, hopefully suggesting by her sage presence that great minds think alike.


I made it to the Rectory Roxy for a brief pit stop and was impressed with what they have achieved there in such a compact space as well as the sheer quality of the short films being shown. 'Lega'say' featured a host of local voices responding to the changing face of the region, especially in light of the 2012 Olympics. Another gem, well worth seeing if you get the chance.

I ended the day at Ye Olde Rose And Crown where I caught some of the art on offer, including Forest Poet Roger Huddle artwork in The Red Room. To my tired eyes, the quality and range of talent on offer was eclectic and of a high artistic standard.

I also caught some poet's corner poetry on the way home, via Aubrey Road by poet Eleanor which topped off an day where to say I was sated by all the art and culture on offer would be somewhat of an understatement.