2nd Of June: Some conversations with artists

I caught sight of William Morris's former dwelling on 74 Diana Road, which will be the site of a
plaque unveiling by his great-great grandson, on my way to catch 'Favourite Words' and other Art Trail events. Katja Rosenberg greeted me and gave me guided tour of her extensive and compact exhibition. I found the time to contribute a couple of my own favourite words, in my case 'gallus' (a Glasgow slang term for swagger of panache); 'poltroon' (idiot) ; and 'kunst' (German for art). Katja, in common with all my hosts thus far was generous and indulgent of me time-wise. Hers is an impressive collection, some 150 local artists of all ages and abilities, a truly inclusive event and very well worth seeing and taking part in. It's just on the corner of Pretoria Road (above the International Food Store) at St James Apartments. Her roof garden is also worth seeing into the bargain. I've included a selection of photographs of the works, including my own amateur daubs on Katja's colourful floor.

I went straight from there to catch 'Pfuit!' a four artist exhibit at Oxfam on the High Street opposite Katja's Favourite Words. Julia Spicer imaginings of cities which we can view, but never enter, were reminiscent of science fiction sets and starkly dystopian in their execution. It had echoes of Alejandor  Jodorowsky's set designs and stay in the memory long after viewing. Wendy MacMillan's piece was a thought-provoking and moving meditation on dwindling global resources. Michael Murphy's joyous and abstract photographs evoke nights of raving in a kaliedoscopic whirl, whereas Robert Jackson's abstract geometric shapes are akin to a white-out op art. A wide spectrum of artistic endeavour and a great temporary addition to the High Street.

In The Mill, I conversed with artist Bex Ward about her colloaborative piece with Ali Wall, a bold and baroque retelling and indeed reclaiming of the Grimms' 'Rapunzel'. Bex has a background in everything from DJ-ing to fashion and is primarily a mask maker, whereas Ali is, in Bex's words 'a matriarch of the creative world' who works in costume design among other arenas. The piece is an astonishing three dimensional framed rendering of Rapunzel that the viewer can literally walk inside and be photographed as Rapunzel herself. Bex explained that the piece's existence is essentially twofold; 'to celebrate The Mill as an essential community resource and wrest Rapunzel back from the Hollywood cliches and recast her in her actual role which was one of a kidnapped woman sold into dubious domestic slavery, becoming a single mother of twins' The piece is as thought-provoking as it is utterly beguiling and it represents all that is best in both myth-making and art. The link to Morris is evident in motifs, such as thistles used and the grand scale is a sight to behold. Worthy of The Mill and the talent and range of skills that both artists possess. 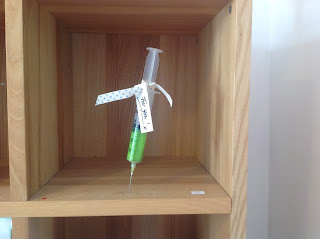 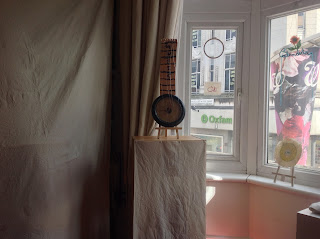 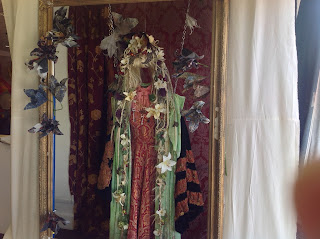