I really like Vestry House Museum and not just because they let me put 10 suitcases in their garden! They have some amazing stuff in there like the precursor to the CD, which consists of huge metal discs in a vertical wooden case that used to rotate to play music.  As usual for the Art Trail there are several different exhibitions or projects inside the museum as well as my installation in the garden. Sba Shaikh’s ‘The Personas of Mehraj’ has used the space she has been given in a quite ingenious way. The three different ‘personas’ are depicted on textiles draped down the windows. 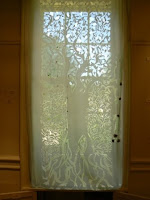 Underneath the windows are small cupboards with doors that have been left open to reveal objects that give a much fuller picture of the concerns and internal life of each persona.

This is a huge contrast to the 4 screens showing a slide show of Percy Wilding’s tours by bicycle. Now 95 years old he got medals for speed cycling when he was younger but hasn’t been able to do much cycling lately because he has a titanium pin in one of his legs. However, it is his love of photography as well as cycling that have made this Art Trail project possible and he is very happy to talk about all the places he has cycled to and photographed since the 1930s. He was also very happy about the fact that his family, many of whom have accompanied him on his cycling tours, threw a surprise party for him at vestry House last weekend when the Art Trail opened. 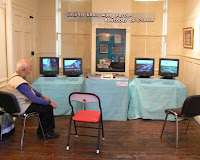 There is a lot of other work in Vestry House too – paintings from MENCAP, photography from workshops by adults and children, different craft works, a single beautifully drawn oak tree by Dean Reddick and don't forget it will host tomorrow’s Craft Guerrilla Tea Party.
After leaving Vestry House I had a  quick look in St. Mary’s Church and am very glad I did. There's a video screening and two large drawings at the front and  lots of photography including the work of students at Kelmscott School. There are some very interesting ideas and images here especially in the storyboard mix of 'Our Local Environment'. I really liked the 'Nightmares' project too while Wendy Stone's four beautiful light boxes in the doorway are definitely more of a dream. 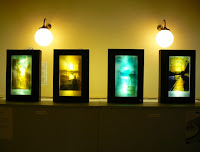 Headed to Wood Street Market and was really disappointed and not only because the Arts Club show had been cancelled! Apart from Paula Smith's studio and huge collection of photography there was only a wall of work by the Vestry House Museum’s painting class. Although Shirley Pountney's gallery shop was closed because she's at the home gallery today, she had left a lot of very bright and visible hanging textile prints. Apart form these, however, there didn’t seem to be anything else going on. It is such a shame that the Wood Street market is so underused. It is such a quirky and interesting place and I love old vinyl stalls anyway so have post a pic of some vinyl I found below accompanied by a strange site specific work by an unidentified artist......
After this my plans went awry. I whizzed down to the CRSA Open Studios but got rather distracted by tea and long chat with Alke Schmidt and Zarah Hussein. My camera then started flashing angrily at me so had to come back here and plug it in for a very long time. Next outing ..... the Inky Cuttlefish party! 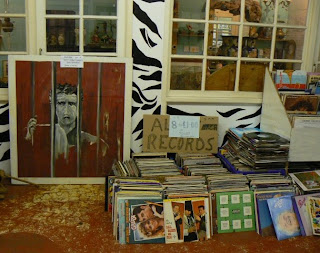