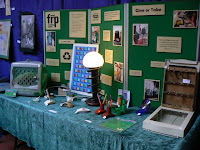 The only venues I have visited twice are the Hornbeam Centre and the Forest Recycling Project exhibition. ‘Eklecticos’ at the FRP was definitely better second time around. The whole space seemed clearer and tidier, the tables had more stuff on them and were all labelled clearly. Order had been imposed on what really did seem to be a quite chaotic first day. Clive Mahoney had methodically labelled and numbered everything including the price. His key rings and pen holders, luxury pet carrier and lamp with a shower hose flex and car suspension spring were very entertaining and quite ingenious.

Same goes for Andrzej Jazdzewski's plants in scanner and printer beds, pet carrier and apple clock. The work that came out of the collaboration with 'ThinkArts' gave a nice splash of painted colour and texture and it was fun trying to work out exactly what the jewellery was made of.

Going up the stairs of the Hornbeam Centre there was the same pleasurable sensation of running a hand along the soft banister provided by Karen Logan’s big red ball of wool. However, at the top of the stairs there are large wooden letter shelves which dominate the very small landing and there is no obvious indication which way you should turn. There is moment of confusion before you head uncertainly into the room containing Anna-Lucie Feracci’s survival garden but still no sign saying who the work was by or what is was called.
The first time I went I didn’t actually realise that Dee Honeybun’s work was down the corridor to the left. I thought that was just the kitchen and offices so I completely missed it. Also, I was with the first walking tour so there were a lot of people trying to get up and down those narrow stairs which added to the sense of claustrophobia and confusion.


However, I think the second visit confirmed that it wasn’t actually the work, that I found difficult but the arrangement of the venue itself. Because of the logistics of this challenging space, clear signage and labelling is really important. Although there was text provided by the artists to explain each work, this was on a separate piece of paper downstairs in the café and was in a very small font. In the café itself Julian Beere’s large and meticulously constructed window piece looked great but it was not immediately clear to me who it was by, or even if it was part of the Trail. However, something that wasn’t part of the Trail and perhaps deserves to be was the plum cake…. YUM!

Dear Valerie, thank you for revisiting Forest Recycling Project and Hornbeam Environment Centre, and for giving a more involved account of the contributions made for The E17 Art Trail.
With respect, I think it is inappropriate for you to have used the term, 'pissed off', in response to the comments made in the blog for Day One. I have not used such language in a public forum and I am surprised you did; 'upsetting' and and 'not enthused' were the sorts of expressions made. I think these are respectful to you.
I think you are right to draw attention to signage, labelling and other issues about access however these are serious in terms of the venue as a whole and I wonder if writing e.g. 'there were a lot of people trying to get up and down those narrow stairs which added to the sense of claustrophobia and confusion' needs more qualification or explanation. The implications of this statement are far reaching - for The Hornbeam as a social centre/public building - for E17 Art Trail and the participating venues and artists.
I am writing as one of the participating artists - not as an official representative of the venues - nor do I write on behalf of the other artists. What I take from the blog is that responsibilities concerning a viewing public have not been taken appropriately or adequately.
I am sincerely sorry if there were visitors to the show who were not able to read the 'In Situ' leaflet - a folded A4 sheet with a brief printed guide to the art works. If anyone has visited the show and not been able to read the guide I will happily provide a larger print version. My email address is julbeere@hotmail.com. Please ask.
Labelling is an aesthetic/artistic/political issue in the work I produced. The window piece consisted of a variety of elements - some of which were unlabelled jars possibly containing a foodstuff. The jars were there to be handled/opened if a person felt able to take that action. If opened, what is there and how would you know and how might that knowledge/sense be communicated. That the constructed window piece was, in part, anonymously presented was implicit in terms of the ideas which informed it's making e.g. the pixellating of images to obscure or disguise an identity.
I've followed your blog and I admire the generosity of spirit and dedication which you have expressed. The art trail is a large and complex event and from my experience of visiting other exhibitions/venues I have imagined how challenging it is to represent that diversity. I have enjoyed many of your reviews e.g. Day 4, Paul Tucker/Under Construction. I'm wondering why it is you did not give such attention to any of the work in 'In Situ', at Hornbeam Centre. Confusion?
I'm glad you enjoyed the plum cake and I hope you got that free cup of coffee.
With thanks and respect, Julian Beere.

Thanks for all this feedback Julian and I will henceforth desist from inappropriate profanity...