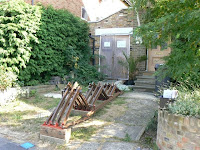 Was out there before 11.00 today…. result! Another result was the weather, which is like Art Trails of old and result number three was my first stop, which was Steve Scullion’s front garden. I loved the sketches and images Steve sent with his questionnaire answers before the Trail started, so I was really looking forward to seeing how his sculpture worked out.

I was not disappointed. The Victorian railway track now so delicately arranged in his front garden in West Road made me grin from ear to ear. This is definitely one of my favourite Art Trail pieces and I think it should either stay in his garden forever or be put placed somewhere even more public where we can all watch it slowly rust. 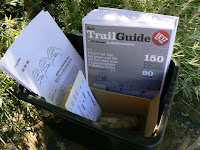 He had also reinstated his box of Art Trail maps and info. A comment he put on the blog yesterday said:

"As my work is outside, so are the boxes of Trail Guides, Info sheets, and cards, and as it’s Monday so was the recycle box ….. yep, they took the lot. Route 1" 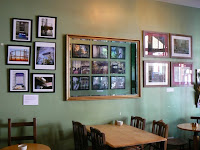 After this I went up Orford Road and ‘did the village’ starting with the Deli. I was really impressed by how the work of the four artists showing there had been arranged. It all looked fantastic on that green wall. Alan’s McGrath’s series of split image photographs ‘Two Stills in Search of a Movie’ contained some interesting juxtapositions and worked really well next to Evolve’s smaller, more intricately coloured prints.

On the other wall Urban Landscapes by Martin Godfrey made gentle and sometimes funny photographic observations on the urban experience, while the adjacent paintings and drawings reflected a more traditional approach. Unfortunately I didn’t write down the name of the artist. Apparently he or she was drafted in at the last minute after another photographer withdrew.

Across the road from the Deli is Penny Fielding’s shop, Beautiful Interiors which has been a key supporter of the Art trail since the very beginning. It has promoted and exhibited and sold the work of many local artists since it’s founding in 2005 and is always coming up with new ideas that contribute to local creative growth. As well as several artists’ work, there is also a film showing at weekends by Maria Escarabajal and a permanent slideshow of images of E17 taken throughout the year. Twelve of these images will eventually become the E17 Calendar for next year.

Although the shop has always had an element of Americana, this year’s Trail exhibits take that one step further. The window is stuffed with neon tubes and signs and these are dotted throughout the shop too. It is not a huge space and the fact that it all fits in there and there is still room to move around gives it a Tardis like ingenuity. 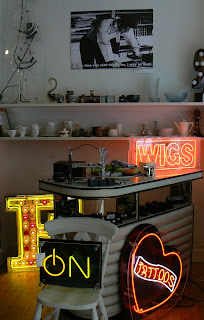 The neon installation, Light. Punctuation. Dwelling is a collaboration between Lynn Harris and Electro Signs, and many of the signs have actually been used in movies over a number of years. Once the movie is made, however, the signs return to the shop where they often sit sadly in corners and collect dust. Their resurrection at Beautiful interiors is inspired. Not only does it create a spectacle and fantastic atmosphere but it has also resulted in many of them being sold.

A perfect accompaniment to all these signs is David Barettes series of subtitled black and white stills from classic 1950s movies entitled Subtitles (of Life & Death). Unfortunately, I couldn’t find out what films each of these stills were when because I couldn’t get past the intro on David Barette’s website! I have since discovered that the film titles are actually written below the stills themselves so I was just being blind.... but this is not unusual! 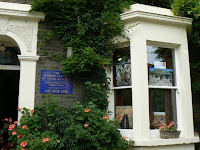 Just up the road from Beautiful Interiors is the Modern College of Music and Drama where photographer and anthropologist Maria Saur is showing a collection of photographs taken while she was working in Africa. While the scenes of village life in Africa are very different to the scenes of ‘village’ life outside the venue, the idea is that ordinary people who visit the exhibition can make a connection to the lives of the ordinary people depicted. This is another of those Trail venues worth a visiting for its garden as well as the art.

A quick but very pleasant diversion to the Petals in Bloom flowershop meant I got to see falling figures - borrowed patterns by Jude Stedman which was most therapeutic. Very delicate work, surrounded by flowers and access to free chocolates on the way out. 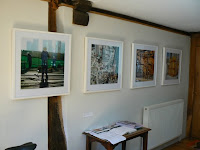 Round the corner is the Ancient House, a village landmark that seems as if t should be a museum form the outside but is actually an amazing flat on the inside. Displayed here were the results of a recent trip to Dubai by Paul Tucker entitled Under Construction.

Having spent the last two years in the UAE, I am very familiar with Dubai but was not expecting to be suddenly faced with such a stark and succinct reminder of it in E17. It is also strange to see images of such an ultra modern and rapidly developed place in a building older than anything there except the sand. The photos rang very true. They encapsulate some of the physical realities of the city but also stand as an observation of the time they were taken which was just before the recession and the enforced cancellation of many construction projects. The absence of any people in the shots except a few construction workers is a nice observation. This human emptiness as well as the windblown and desolate atmosphere pervading some of the other images suggests the desert it once was. 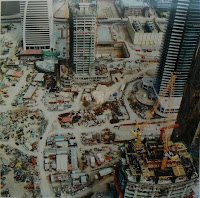 Also in the Ancient House is Stitchery Brew, a series of textile works by Penny Fielding. In her response to the blog questionnaire she sent images of three of these works. However, they definitely look much better framed and hanging in the light of a window in the Ancient House. The richness of the colours and textures and the detail of how each piece is composed are much more visible.

The other display is Bead Soup by jewellery maker Ellen Jones. Bead soup refers to pieces that are made from leftover beads and other materials resulting in a more random design than would normally be the case. There are interesting contrasts between these pieces and the other works on display that have been more carefully chosen and colour or shape co-ordinated. Being addicted to the random function on my music player I rather like the idea of random design jewellery!

That’s it for Day Four… well most of it! I actually went to a couple of other venues after the village but I need to go out now and remind myself that I have a life … so will post about those tomorrow…. 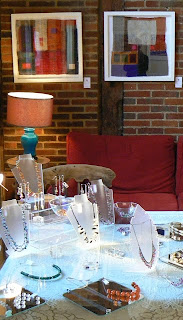 I wish to point out that you have missrepresented my work with a false title. My show is " two stills in search of a movie" and not looking for a movie.The essence of the work is lost right there together with any subsequent accuracy of empathy on your part. Please correct.
Yours sincereiy a mcgrath