Got off to very late start today because it took me so long to write yesterday’s post about Image 17. So didn’t head out until mid afternoon today. Went up to Hoe Street to have a quick look in Lot One Ten completely forgetting the E17 rule that nothing opens on Mondays. 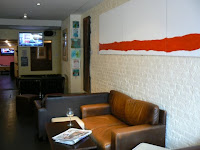 Popped into Celsius on way to library and found some really cool stuff from the igloo people's art organisation! Did seem a little top heavy with work by Michael D. Bowles but that’s partly because his work was labelled more largely and clearly than anyone else. In general I preferred his print work to the paintings although I liked the one behind the decks a lot and the big red slash painting works well in the Celsius setting.

There were two really good black and white photos but not sure who they were by. I was not sure who did the two watercolours either but they gave a rather contemplative contrast to most of the other work. 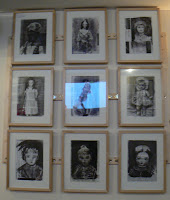 Sarah Coloquon’s prints on newspaper were  interesting and there was an added dimension when trying to photograph them for the blog. The ubiquitous presence of TVs (3 of them) in Celsius means it’s almost impossible to photograph any work behind glass without an added TV reflection.

Terry Su Patt’s poppy, collagey, Banskyfied oils were fun but confirmed the seemingly all pervasive influence of stencils and other graffiti these days Several of the works on display here made such references as did several in my next venue – Walthamstow Library. The council may regard graffiti as vandalism but photographers and print makers now all seem to be stealing it. 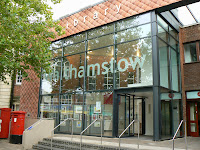 The library had a lot of different work on display for the Art Trail. The main foyer area has a lovely orange wall covered with Art for Amnesty cards and there are loads of paintings by Ron Bowman on display in the window. Very mixed bunch of images but the whole collection makes quite an impact from both outside and inside the library. There was a lot of photography along the lovely wood panelled corridor from members of Walthamstow & District Photographic Society.

Jeremy Williams monochrome homage to smokers was fun and I really liked the work of all three of the Johns (unfortunately I didn’t write down your surnames!). Also liked David Elms two quirky Walthamstow pics and Jackie Whalen's Neon Nature paintings were a real splash of colour inside the library itself.

Pete Tomlinson's Lochkamera project is fascinating in terms of the process and  technical aspects but I do find the resulting portraits a little bit creepy almost like a collection of blurry images of missing people. 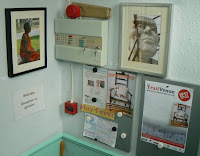 Next stop was Healthworks where Chloe Redmond is showing quite a lot of her travel photography and a few dance based pictures. I particularly like the Egypt shots and the way two of the Thai images sit in a downstairs corner either side of the Healthworks notice board. The best time to go here is actually at weekends from 4.00 – 6.00 when she does a live installation and a showing of one of her short films. 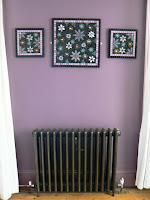 Mosaic work by Amanda Parker is also featured in Healthworks and there is one 3 part work that looks so perfectly site specific it really should stay there forever! The main colours in the work are purples and browns and it hangs on a purple wall above a chunky brown radiator!

Sharon Drew’s paintings also seemed very at home in Healthworks. Some take only minimal aspects of nature while others are abstracted colourscapes that retain a sense of shifting form and line that keeps them close to the natural world.
There were a few other things in there ‘Toys in Sunlight’ by Rachel Budd and one of Steve Nayar's squares but what I’ve started to notice with a few Art Trail venues showing group work is that the clearest and biggest labels get you most noticed! 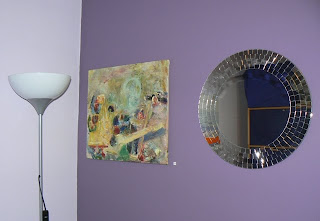 Finally did a dash through the Mall to see Wendy le Ber's artist books in the front window of Waterstones. The way in which Wendy describes this medium and her relationship to it is very interesting and it was a really nice idea to put them in a bookshop window. However, I think they are another example where a much bigger sign was needed, including more obvious information about what they were. They were also too low in the window and very few people seemed to notice they were there which was a shame. 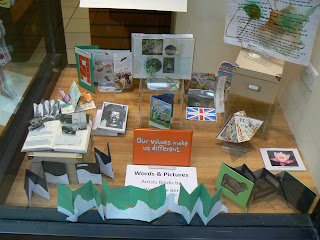