I worked out a review schedule for Sunday which took in the whole of Hoe Street, a bit of Forest Road and a few other things down side streets. Did it happen? Nooooo! All I managed was two exhibitions BUT the total number of artists in those two shows was 19 so maybe two exhibitions isn’t so bad after all.


First stop was the Image 17 exhibition at the Old Glass Factory in Hoe Street. The project which received one of this year’s Arts Council Commissions involved a total of 15 photographers, each of whom photographed one or more of E17’s numerous social groups, clubs or societies.
It took a long time for the Image 17 project to find a venue. After looking at a lot of empty shops one of the group suggested they ask the owners of the Old Glass Factory and this was a great idea because the exhibition looks really good in this space. It has plenty of room and there’s a nice mix of natural light from glass roof panels and a few overhead strip lights. It’s actually the first time this venue has been opened and used for an exhibition. Normally it’s a fashion photographer’s studio so while the Image 17 group were setting up, beautifully, bizarrely or inadequately dressed people would regularly waft through.
First is Paula Smith who photographed the Lea Bridge Conservation Volunteers. Her 6 photographs showing volunteers out in the Lea working on the fields, marshes, ditches and streams are very interconnected. Viewed together they are like a simultaneous theatrical performance of arms, hands, gloves, galoshes and sticks moving purposefully among long grass, wild flowers, inky water and pond weed. 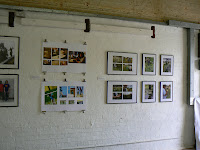 Next to them is Jo Sealy who photographed the Walthamstow Literary Saloon and the Emmanuel Christian Centre Badminton Club. The two sets contrast greatly in both colour and content. The Literary Saloon is all browns, beiges and rich dark shades, interspersed with the muted light of a wooden pub interior. This gives the images a stillness and very genteel, almost Victorian sensibility. Her other photos of the Emmanuel Christian Centre Badminton Club, couldn’t be more different. Bright light, blues and yellow-greens with subjects often depicted as blurs of energy and movement. 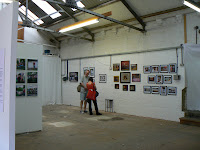 The next set of photographs are of the New Parkour youth group and the Free Runners. Photographer Udall Evans uses black and white for two of these photographs which works really well and suggests earlier periods of urban photography. As well as the group members, another focus seems to be the urban setting itself especially the brick walls. In one photograph of two figures, there is an extra piece of wall where it seems a third person should be standing. 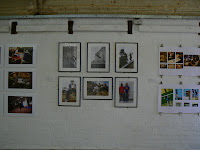 James Macauley photographed the Waltham Forest Bridge Club, The College Amateur Dramatic society and BreakDance. The pictures succinctly capture an essence of their vastly different subjects, but what is most interesting is their cohesiveness as a set of images. Despite the differences, the way in which they are composed and shot makes it seem perfectly natural that they should be together. There is a sense of intimacy about them which allows the viewer a presence at the events depicted. Similarly Rachel I’Anson’s photographs have a sense of being there. Her subjects, all-women groups, were the Blackhorse and Standard Morris Dancers and the Bees Knees Quilt Makers. Her use of light and shadow combined with partial detail, rather than full subject shots, suggests a whole but allows the viewer to complete the picture for themselves.
Sean Pines’ photos include a great portrait, pictures of pigeons, pigeon coops and racing timers. Together they offer a fascinating glimpse into the pride of the Walthamstow United Pigeon Racing Club. More than any of the others, these images really do seem to reveal a private world or at least a world no longer visible. 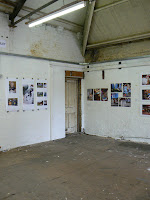 Nicola Tree’s image of a beautifully green and spirit levelled lawn is much more familiar and her other image of the Walthamstow Bowls Club also captures the essence of the game. The stillness and seriousness of these images make a nice contrast with those of the Pump House Museum. As well as the riot of red on the museum wall, the two men in the other picture seem to be having a lot of fun.
Simon Warren’s images of the Bonsai Society capture a lot of activity in one large montage with an adjacent image of all the members standing proudly behind their trees. Unfortunately the montage has so much going on it’s hard to focus on individual aspects of it. Interestingly I could appreciate each component and their juxtaposition much more on screen than I could on the wall. However, I think this was partly because of their proximity to Paul Tucker’s strictly organised bank of separately framed images. Apart from the frames, there was nothing else separate about Paul Tucker’s photos of Chingford and District Model Engineering Club. Their combinations of green and maroon, sunlight and shadow gave an enduring impression of certain kind of British summer day. 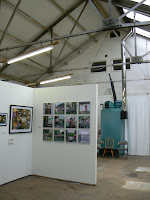 Martin Godfrey chose a Dance Club, a Flower Club and a Model Railway Society. The images of dancers suggested an earlier time while the pictures of the flower club featured very few flowers but had a wonderful shot of those very familiar green tea cups waiting to be filled. Along with the model railways this whole group seemed out of synch with standard perceptions of the present.
This was also the case with Paul Greenleaf’s photos of Leytonstone and District ex-servicemen’s club, and his decision to put his photos in old frames was inspired. They are the kind of cheap and mismatched frames that are instantly recognisable and are completely in keeping with the age, décor and pictures on the walls of the ex servicemen’s club. The focus on the building, rather than the people who use it told a story in itself, as did the arrangement of the photos around a central image. 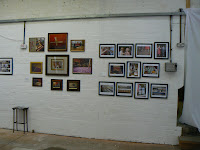 Dan Green’s pictures of Epping Forest beekeepers were very simple but very effective. Like the pigeons there was a definite sense of pride in belonging to this particular group which came through. The photos of the pyrography class didn’t work as well. Unfamiliarity with pyrography and the fact that the images of the class were more distant meant they made less impact. However, most people who see these will learn about something they never knew existed.
Joanna Hudson single image in this show was large and printed on canvas. The image itself was strikingly composed and the graffiti backdrop made it bright almost to the point of over saturation. The problem, however, was that close up the image slightly lacked sharpness which combined with the texture of the canvas gave it a strange artificiality. 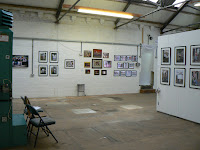 Claire Byrne took pictures of freecyclers outside their houses or in their gardens holding the objects they are offering for freecycling. These included a projection screen, a stack of videos, an office chair and a garden parasol. What makes the images intriguing is that each freecycler is depicted obscuring their face in some way as if the very act of freecycling was somehow illicit.
Last but not least is Katherine Green, the organiser of the whole Image 17 project. She took photos of domino players and people at the Cactus and Succulent Society. One of her cactus images featured on the blog before the Trail but it was great to see a close up of the black and white of the dominoes and a player’s hands over an old brown stained table. 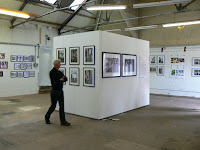 Coming out of this exhibition you feel like you know more about how the whole country functions and not just E17. These kind of social groups are everywhere and by depicting paraphernalia like timers, clippers or needles, and incidentals like tea cups and raffle tickets, the exhibition made realities out of abstractions. The cultural time span covered, or at least suggested, by the exhibition is also fascinating and forces the viewer to reflect on how dramatically things have changed in some ways but also how they have stayed exactly the same in others.

Unfortunately. Meet is only open at weekends so if you missed it this weekend make sure to get down there next Saturday or Sunday. I was going to post more detailed photos of the things I reviewed here but in the end I decided that a few frustrating distant gallery shots might be a better way of encouraging people to go .......
Image 17 Website http://www.image17.co.uk/ 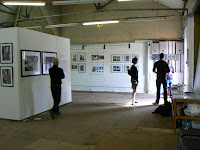 why no close ups of the photos?