The only other show I saw yesterday was the Open Studios of Paul Robinson and Anssi Sojakka at 277 Billet Road. They have the distinction of being number one on the Art Trail map, however they have the problem of being the furthest venue from the centre of the map. This is exacerbated by the fact that they are rather isolated with very few other venues anywhere near them. So until they can encourage or coerce their neighbours to reveal their creative sides it takes a dedicated Trailer to go all the way up to Billet Road. To be honest the only reason I went was because Paul posted a comment on the Blog saying that they had no visitors on day one.

I am absolutely delighted that Paul did so because otherwise I would have missed a fantastic Art Trail venue. Both Paul and Anssi are artists so the whole house is full of both of their work and there is other generally cool stuff as well. There are paintings and prints, a skeleton, a mannequin that suggests some kind of Art Trail bondage perversion and an old Subbuteo box in a frame. There are inspirations from octopi, forests, death and the occasionally mean streets of the UK. As if that’s not enough you then walk out into the garden and there at the bottom is a beautiful studio.

The studio is full of paintings and prints too. There are vertical multi layered images, a huge canvas created from using chains as stencils and intricately detailed paintings of animal skeletons that have an almost 3D effect. These are reminiscent of early animal anatomy studies but the technique couldn’t be more different. The studio is also full of Anssi’s hand mixed oil paints with colours that separate on the canvas as the paint dries. This was fascinating and we got to see his own colour mixing chart as well as bathing in the sweet smelling atmosphere of linseed oil.

There is also a climbing wall on the back of the studio so if you get bored with all this you can go and entertain yourself by climbing onto the studio roof.

This venue will be open next weekend too so my advice is to just get down to Billet Road … if you’re up in Lloyd Park you’re almost there anyway and I whizzed down there pretty quickly on the bike from Hoe Street. 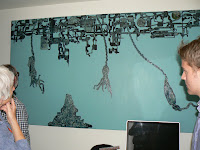 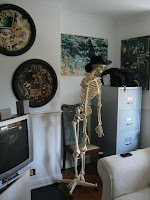 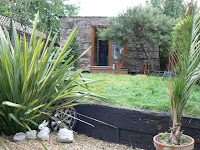 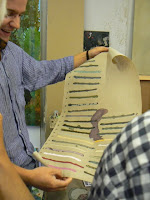 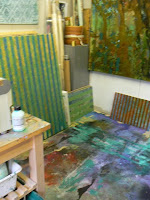