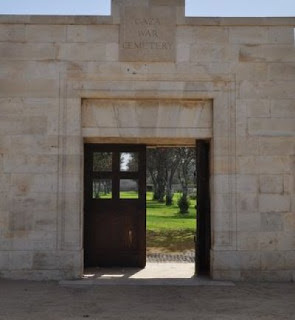 Inside St Mary's Church a big screen shows photos of well-tended graves, shaded by pomegranate trees, with bright blue skies overhead. This peaceful place is in the Gaza Strip and the photos are by Walthamstow resident Aser El Saqqa.
Ever since Aser was a boy he has been curious about the cemeteries in the Gaza Strip known locally as the "English Cemeteries" because thousands of British and Commonwealth soldiers are buried there. When Aser was older he learnt that these tranquil places had been the sites of battles over the spoils of the collapsing Ottoman Empire between 1915 and 1918. Gaza's position between Europe and Africa made it a valuable asset and thousands of soldiers from all over the British Empire died fighting for this stretch of land so far from home.
It's great to see these photos projected on the huge screen and learn about the battles. However, the exhibition would have had more of an impact if prints had been hung next to each other so I could form more of a narrative and look at photos for longer, rather than watching one photo fade into the next on the screen.

As well as Aser's bright digital photographs, older styles of photography are also on display at the church, with Chasing Shadows. Pupils from Kelmscott school explored Victorian hoax photography as a starting point. They used home made pin hole cameras and a creative use of lighting and Photoshop to create exciting, at times ghostly and disorientating photographs. More information about pin hole cameras is displayed alongside the photos for those who are inspired and want to learn more. 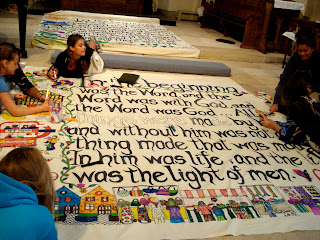 The church was full people lying on the floor near the altar, carefully colouring in E17 artist Jean Elliot's "In the beginning", fabric she has printed with verses from the bible and illustrated with lovely images of Walthamstow and further afield. It will be completed with the help of people adding colour and inking in the words. The extracts are from the Christian bible, Genesis from the Old Testament and John's Gospel from the New Testament. Jean's piece celebrates 2011 being the 400th anniversary of the production of the King James Bible. It is a nice comment on the first bibles, which were copied and decorated by hand and reflected the lives of the culture of scribes and artists in their choice of fonts and decoration. When all the lines are coloured in, the pieces will be displayed in all their technicolour glory. 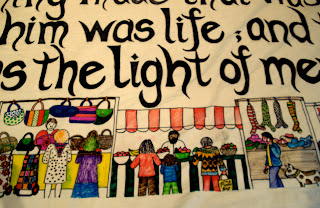 Thanks for mentioning Chasing Shadows - the pupils at Kelmscott worked amazingly well on this project and really took to the pinhole process producing exciting work.