People in motion - photographing strangers (and a special offer) 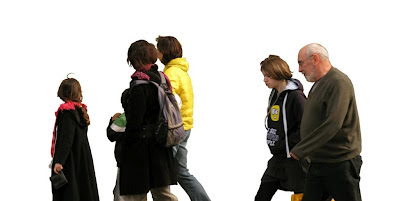 Two shows grabbed my attention last weekend, in between the demonstrations: 'People I don't know' by Esther Simpson at La Delice cafe, and 'Motionblur' by Matt Russell at the Rose and Crown. Both shows capture images of complete strangers, but in completely different ways.

The ethics as well as the practicalities of doing that are what made me especially interested in these two photographic collections. When you stand in the street taking a photo, typically people wait for you to finish before walking in front of the camera, which isn't necessarily what you want. Asking people to pose doesn't seem like the right approach when you want that sense of people going about their own business, of places with normal everyday life going on, and posing would give the images a completely different meaning.

Esther Simpson's subjects are close up and they must have been aware that she was taking a photo. Maybe they thought she was photographing something else, and that they were just in there incidentally. Perhaps she asked, but they don't look like people posing, which is exactly what is so nice about these photographs: some of the people are oddly dressed and must have expected some attention, but nearly all are unselfconscious. You could do that with a telephoto lens but somehow I don't think that's the case here, a gentler approach seems much more likely.

Matt Russell takes his pictures from the top deck of a bus, using his mobile phone. They are intentionally blurred, so you get just the idea of the person and the way they are moving, no detail at all, and certainly no question of their being recognised or knowing someone is taking a picture of them. The view from above sets the human figures against a fairly plain background of pavement and the slower part of buildings, so they have an abstract quality, nicely composed despite the apparent need for haste.

Once someone took a photograph of me at a cycling event, and for some reason he found out who I was and put it on Flickr with my name and a hyperlink to my work website, which I thought was going way too far - but I didn't mind about the photo itself. Is it wrong to include passers-by in your photographs and then show them in public? It's perfectly legal. Some people will be flattered, others indifferent, maybe some will object. It's far too fascinating to abstain.

Well just in case - if you come to the Walthamstow in Perspective show and recognise yourself walking past some minor architectural masterpiece, you get a free A3 print. Not until the end of the Art Trail though.

Walthamstow in Perspective opens this weekend at no. 11 on the Art Trail.