As I made my way over to The Drawing Shed's Garage, I was not sure whether I was going to met by people or whether the entire event was virtual. A live twitter performance? It could have been either and it was both. The project run through The Drawing Shed and co-led by poet Jacom Sam-La Rose explores twitter as a platform for creative license. This is an event of an ongoing project, holding creative writing workshops on twitter. Recycling words, re-tweeting, creating and copying, it is almost a fresh modern day version of William Burrough's and Brion Gysin's famous cut-up poetry and just as radical as that was for it's time.

These 'workshops' have culminated in poems no longer than 140 characters printed and signposted across the estates. They are set up 24 hours throughout the art trail, so take a stroll round The Drive and Attlee Terrace and get some 140 character profoundness. 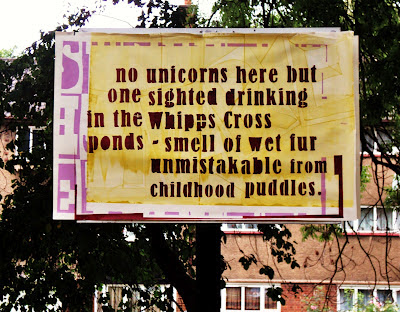 The live performance that was on yesterday involved residents of the estate gathering and then given a loose brief  around  psychogeography and interaction to follow as they walked around and tweeted with the hash tag of #bestow. If you scroll through all the tweets landscapes are created, sounds are shared and images are collaged together. There are also sudden changes in direction and theme with one tweet directing it all. The event was also promoted through the Poetry Trail for anyone to join in wherever they were, so intersliced with the gathered wandering tweeters, there were others who didn't have the brief but could still interact and even dictate from wherever they were. The tweets will now be pasted together to create a short story/poem which will appear on The Drawing Sheds' blog.

Next up from the Drawing Shed on the Art Trail is a pop-cinema next Saturday (8th) which will be screening YouTube cutups, films from the Walthanstow International Film Festival and Black & White beauties from morning to noon.

The Drawing Shed's  'PeopleLikeUs' project is no.109 in the guide.