Held in The Bell, William Morris and Polar Bears is an exhibition put on by the local Greenpeace network who argue that if William Morris were alive today, he would be a Greenpeace campaigner. They present photographs of Phil Ball, the ‘Arctic 30’, the Rainbow Warrior and deforestation in Indonesia all with a William Morris presence – perhaps he is one of the campaigners, or his wallpaper lines a campaigner’s cell. Quotes from the man himself are written alongside the images.  So, beneath a photograph which shows William Morris at a fracking protest he is quoted as follows; "a good way to rid one's self of a sense of discomfort is to do something". Here, Kester Muller, a member of the local Greenpeace network explains their case. 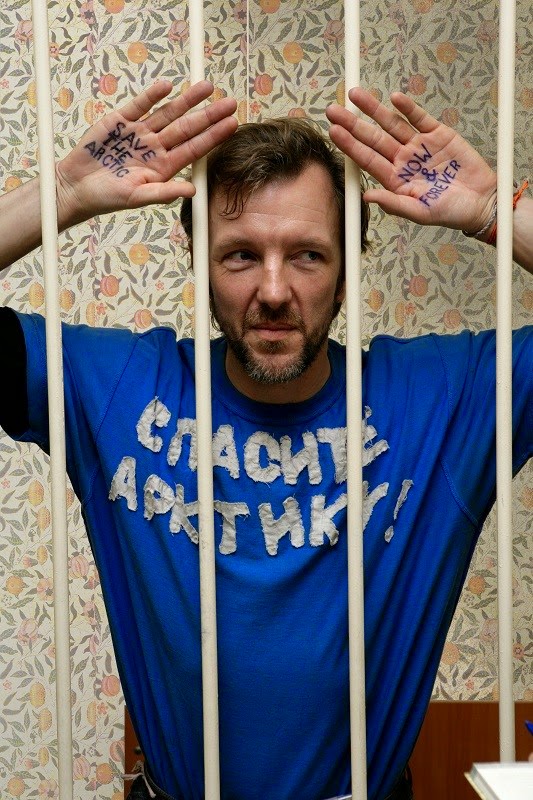 “We are only the trustees for those who come after us.” (William Morris)
Phil Ball, Greenpeace activist and photographer, father of three,
and one of the Arctic 30, incarcerated in Murmansk in 2013.
William Morris: artist, writer, radical.
An exhibition by Greenpeace Waltham Forest

Many people nationwide will have heard of William Morris. If you are a Walthamstow resident, you can hardly avoid his legacy as a local luminary – a craftsman and artist associated with the Pre-Raphaelite Brotherhood; adding a touch of glamour to our humble borough's history.

What is often forgotten is that William Morris was also an incendiary intellectual, who through embracing radical politics risked his reputation and career.  Starting in his mid-30's Morris proposed and articulated a form of “libertarian socialism”, and is described as having “embarked on a relentless series of speeches and talks on street corners, in working men's clubs and lecture theatres across England. Though he withdrew from active politics after 20 years, Morris took his ideals with him into his later pursuits of print making and typography – in that his printing press was run in true collaboration with craftsman and artists.

Morris was also a vocal critic of environmental degradation and exploitation and actively examined how our economic system was contributing to this process. He wrote: “Is money to be gathered? Cut down the pleasant trees among the houses, pull down ancient and venerable buildings for the money that a few square yards of London dirt will fetch; blacken rivers, hide the sun and poison the air with smoke and worse, and it’s nobody’s business to see to it or mend it: that is all that modern commerce… will do for us herein.”  He believed that art was integral in informing and fostering a ‘sustainable’ relationship with nature, but also saw and elaborated on the potential of scientific enquiry to limit or reverse environmental degradation inflicted in the name of ‘progress’.

Biographer Peter Stansky sums up his impact: “Morris's views on the environment, on preserving what is of value in both the natural and "built" worlds, on decentralising bloated government, are as significant now as they were in Morris's own time, or even more so. Earlier in the twentieth century, much of his thinking, particularly its political side, was dismissed as sheer romanticism. After the Second World War, it appeared that modernisation, centralisation, industrialism, rationalism – all the faceless movements of the time – were in control and would take care of the world. Today, when we have a keen sense of the shambles of their efforts, the suggestions which Morris made in his designs, his writings, his actions and his politics have new power and relevance. “

Greenpeace believes that if Morris was alive today, he would be a Greenpeace activist!

If you are interested in getting involved in the local network, please visit http://www.greenpeace.org.uk/groups/walthamstow