Ru, from Organiclea, bravely took to the stage as the first demonstration and "act" of the day. 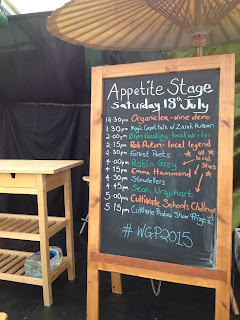 He shone light on the mysterious world of creating your own wine. It seems though some might have experimented with their own mini microbrewery fermenting away in their garden, wine has more finesse and intrigue surrounding it. 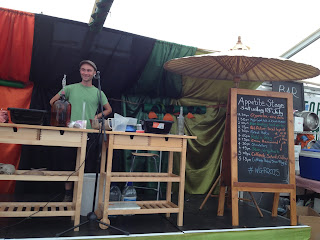 Armed with bags of foraged cherries from the towpath and plums from the tree in his garden, Ru called for some willing volunteers.

The first essential step we were told was to sterilise everything: equipment and hands so that they reduce the number of microorganisms competing with the yeast. Once this was done, the volunteers got stuck straight into cleaning, scrubbing, squishing and creating an admirably messy ‘mash’ of fruit.
Ru’s explanation simplified the process and even made the more mathematical calculations of how to calculate the specific gravity and therefore the alcohol content, a little less bamboozling to those starting out.

One thing he pointed out was the country wine didn’t need to be sweet, in fact he preferred his quite dry.

The equipment he brought with him looked impressive, especially the demijohn, but he explained there were simpler versions you could get online, or surprisingly quite a lot of equipment from Wilko!

Once he had added in all the ingredients and had set it up to bubble away Ru said his main "take home point" was to have patience. All too often the last bottle of wine from a batch he found was the best and he had wished he had waited a little longer for the rest. In general he said you need to wait a minimum of a year until you even think about touching it.

If you’re interested in learning to make your own wine, feel free to contact Ru through Organiclea. Here's a link to some wine they made. Thank you to Ru for being a pioneer with the food demonstrations at Artillery Island.