Another show that I was looking forward to seeing was ‘We have a product malfunction’ by Roan Allen. He is set up in the Alpha Business Centre off Markhouse Road and what a great space for it! The whole complex would make a fantastic arts centre - secure offices that would make great studios, lots of light, arranged around a green and pleasant central terrace and plenty of larger spaces that could be made into galleries, offices, print studios and shops! There’s even a café there already. Shame it’s going to be demolished soon to make way for a bigger Sainsbury’s … or so rumour has it…. any clarifications most welcome. 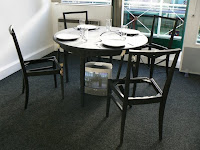 Anyway, I digress….. but I think that’s because I don’t’ know where to start with ‘product malfunction’ because there is so much packed in there it’s like a mini multimedia group show. The space consists of one room with three smaller rooms on one side. Each of the smaller rooms has been used for a different installation while the larger central space contains both wall and other works.
The first thing you see as you enter is a table set for dinner with a TV on the floor underneath it. Closer inspection reveals that each of chairs around the table only has three legs. The missing legs have been used to create bars from the table to the floor behind which the TV is imprisoned. The point being made about the decline of family communication within households is slightly confused by the fact that the TV is showing a video of the whole installation being set up. This inevitably results in the viewer feeling compelled to watch the TV!

On one wall in the main room there is a series of embroidered prints apparently showing cows organising themselves to cross a motorway. This is not apparent without reading the explanation but it doesn’t really matter. The uniform green and black square images provide an amusing and interesting visual diversion regardless.
On the floor near the cows, stands a device comprising a pump, an inner tube and two small concrete slabs on hinges which the viewer operates. Inspired by the motion of a book being opened, this is a fun and clever piece of mechanical engineering. 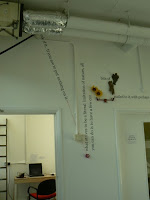 On the opposite wall is another completely different kind of installation which uses text, toys, chains, yo-yos, a ruler and other objects to spell out a quote from William Morris about the representation of nature in art. The foundation of this piece are the words ‘and, or, but’ which are represented by bridges, scales and yo-yos respectively. Although this particular piece was explained conceptually in the responses Roan gave to the blog questionnaire, its visual reality demands time and concentration to fully appreciate. However, there is a short video clip at the end of this post. 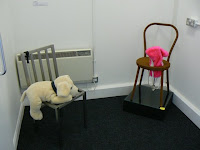 One room leading off the main space contains two chairs, both of which are both rather beautiful in their own right. Attached with a lead to one chair is large toy dog and fixed through the seat of the other chair is a bright pink furry bag fitted with a spoon and an internal pendulum. There is a lot going on with this piece too but it allows the mind to wander and is thus much more open to personal interpretation.
In another room you sit down at a desk and read a letter. There is a lap top with an extended USB lead and incongruous objects placed around the room. A printed sign instructs you to plug each of these objects into the USB lead. At first it’s hard to grasp but then you realise that there is a USB connection embedded in the heel of a shoe, in a ladder, a toilet seat, a rock and a lump of slowly moulding cheese. This moment of realisation is actually the key moment for the viewer in this room. It is the very idea of plugging these objects directly into the laptop which is inspired.
On connection each object plays a video of its own experience. This is a fascinating idea but in trying perhaps a little too hard to convey the object’s authentic reality, the video clips are often too long to hold the attention. The knock on effect of this, however, is that they inspire the viewer to construct alternative narratives for the different objects.
There’s one more room but after the excitement of all the others it did seem rather too understated and a bit surplus to requirements. Overall, though I would say that this is an Art Trail must see but make sure you give yourself time to take it in. Because of the location it doesn’t seem to have had many visitors so chances are you’ll get the whole place to yourself…..