Four women artists were invited to take part in an exhibition called EDGE at Inky Cuttlefish. The brief was to show artwork that was "edgy", confrontational, dark, unsafe and personal. (I haven't been able to find out who invited them to take part or whether they just got together and decided among themselves?) All four artists are exhibiting in other Trail venues and I was very glad to be able to see more of their work and what they made of the theme.
Esther Neslen's work explores the idea of occupying space and being in one place, with prints of empty chairs alongside sculptures of women, sitting on the same chairs shown in the prints. The woman leaning forward looks tense, hands clasped and the other one sits back, resigned to being there. A print looks through a window (possibly on a tube, train or bus?) into an enclosed space.
At the end of the corridor are Rachel I'Anson's prints, which combine digital and chemical darkroom techniques to magical effect. Using both old fashioned and modern methods gives a certain freedom and originality to the work. The prints show curling snakes and link them to their symbolic meanings, mainly the representation of Eve. Rachel says this "feels like the beginning of an ongoing piece". There are a lot of ideas in this work and I would like to see it explored further.
Symbols are also part of Kirsten Schmidt's work, which is inspired by faith and spirituality across different cultures and times. Her linocuts, paintings and digital prints of ink drawings show intricate patterns and fascinating creatures.
The "ambiguity of imagination" is the subject of Anna Alcock's work. Her prints do evoke a sense of wonder, what is the story behind these images? In a print that makes great use of charcoal and fabric, a chair with a head and wings  looms over a cowering child. She has made this chair/angel creature into a sculpture called "It's my protection?", by collaging etchings onto a chair and making a head and wings out of papier mache. It is beautiful but there is also something menacing about it too.
More of Anna Alcock's work is exhibited in the printmaking studio. Myths, legends, folktales and stories underpin the narratives of these detailed prints, which are also influenced by her South African roots. Her style and subject matter have been informed by the German Expressionists and De Brucke, specifically Kathe Kollwitz.
The other artist exhibiting at Inky Cuttlefish is Jason Hawkridge, who has a retrospective. It's wonderful to chart his development over 15 years of making art. Jason says that "living in Brazil has had a great influence on [his] style of working". Earlier works are mostly mono-chromatic and contrast with the explosion of different colours in more recent paintings. 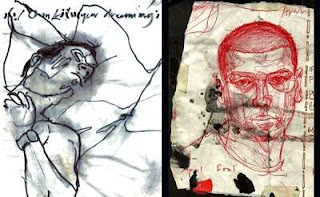 In his very accomplished early drawings, Jason uses mark making and energetically drawn lines, often to slightly disturbing effect. His sketchbooks are beautifully displayed and you can leaf through some of them. This sketch could be described as depicting a "Man Machine", tying in with Valerie Grove's installation of the same name. 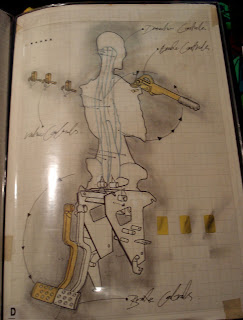 Great review of Inky Cuttlefish! And congrats on smashing previous record of blogposts for an Art Trail. Last year there were 84 and you still have the last weekend to go. It's really great to see so much stuff on the blog. I'm exhibiting this year and haven't seen much of the Trail myself so thanks for this brilliant job!

Loved inky cuttlefish and had a lovely warm welcome unlike blackhorse lane studios across the road!