Photographs from Japan & Dance from the Middle East and

Photographs from Japan (no.175) 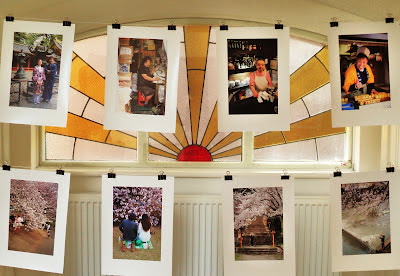 It was a pleasure to meet Paula Smith, because I am sure everyone has met new neighbours on this years trail! Her work she had up were photographs that really blurred the lines between documentation and expression of a recent trip to Japan.

On one level her photographs present a wonderful collage of the Japanese urban and country landscapes, but she holds her camera further and captures in each photo an expression and a feeling, so it is not just a collage of landscape, but a collage of atmosphere.

Egyptian Dance Costumes - Past and Present (no.87)

The variety of this years trail has been so great, I have seen more mediums walking the trail than walking through the South Bank during the olympics and this exhibition is a wonderful example. It was a combination of not just performance, but also an eye-opening display on the development of Middle-Eastern dance. I mean, it is very popular form 'belly-dancing' but who actually knows about the different styles, and how those styles developed through the different cultures and how they collaged with each other.

The open house was filled with all sorts of costumes from Bedwin to Coptic Christian, and Zara, who organized it all, made clear all the reasons for each costume and how they are used. It was really interesting to hear how the degrees of modesty and explicitness in each culture effected and sculpted each type of dance and how the dance evolved by borrowing from other cultures and bringing it into various ways of life. It was nice to hear it from someone was so passionate about it too.

At 4 o'clock in the garden music would start, the sun comes out and an audience appears for performances of all the varied styles. There was a wicked vibe with everyone all ages enjoying and smiling and it ends in everyone shakin' their hips and joining in! 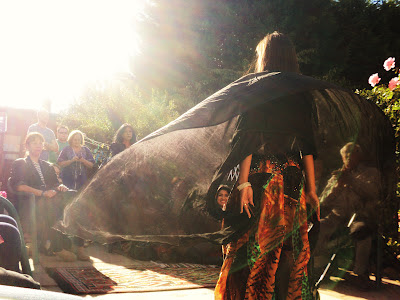