Kids’ Kitchen is a venture that three plucky women have undertaken to get healthier food in the mouths of babes. Currently a non-profit making scheme using local and organic food, including from Organic Lea, a local producer (http://www.organiclea.org.uk/). 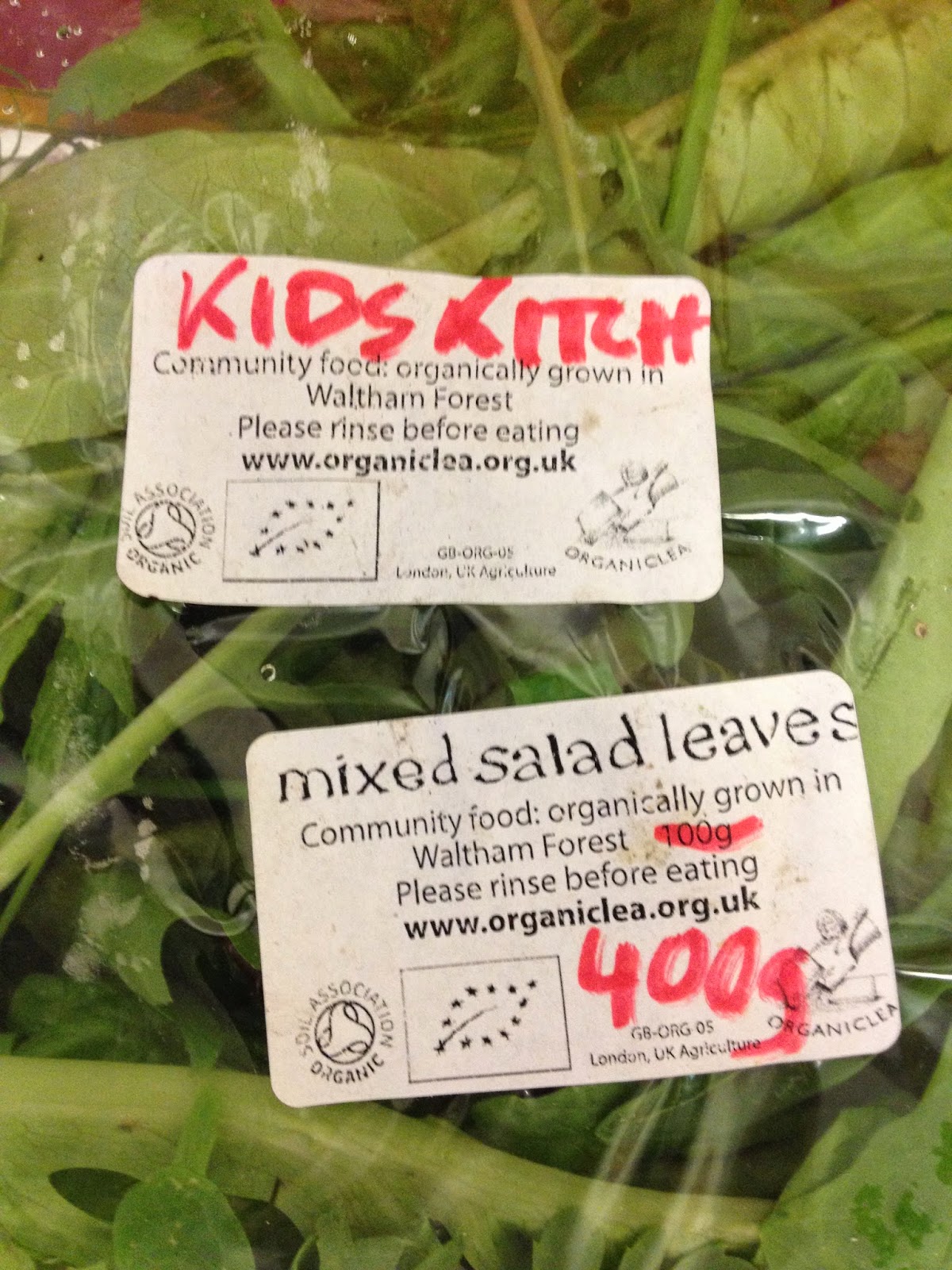 As with other organisations, they are using the E17 Art Trail as a trial to see whether Kids Kitchen can get bigger and better. From my snapshot I don’t think they’ll have a problem. The sunny morning I spent with Mummies, Daddies and little tykes flew past and was full of all the senses of summer.

In fact it was such a splodgy sploshy event that I think the only way to do it justice is to try to recreate the overload of senses I experienced!

Starting with the all too familiar wrestle out of baking cars into the spacious hall; the chatter of children making new friends and discovering the outside playground. The clink of water glasses to refresh overheated parents.

The engaging talk by Eva and Rebecca introducing the ingredients of the ambitious three course lunch their little ones were going to make us. Crunching and sniffing as said ingredients were investigated by tiny curious mouths and noses. The splashing of little hands being washed.

Then onto the fevered activity! Two tables of culinary creation were set out. On one, they started with the ripping and plucking of herbs, the smell of coriander and mint rising in the air. Rinsing, plunging and splashing as ingredients were washed thoroughly. 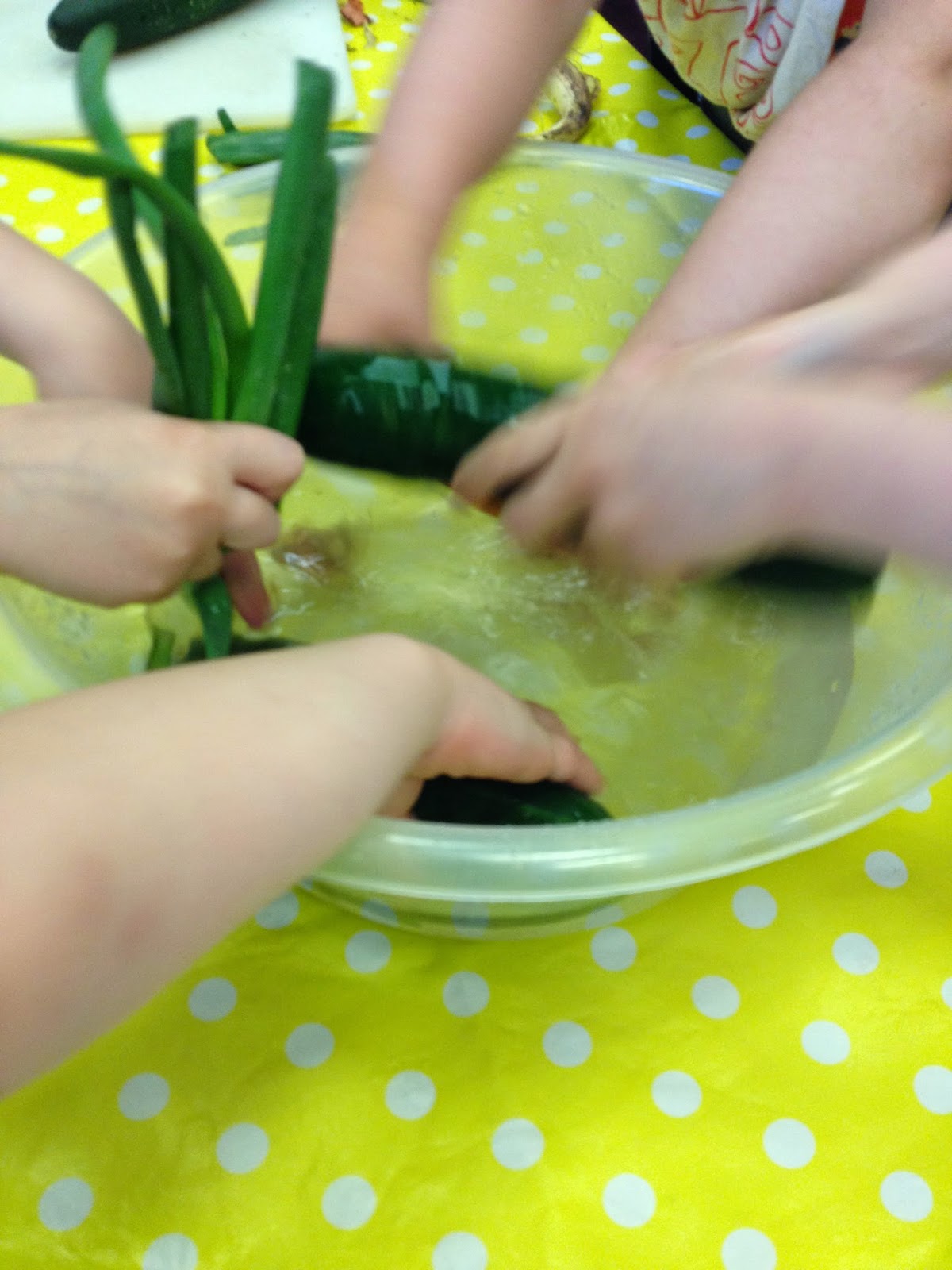 Chopping, pulling and tearing of the summer roll contents. 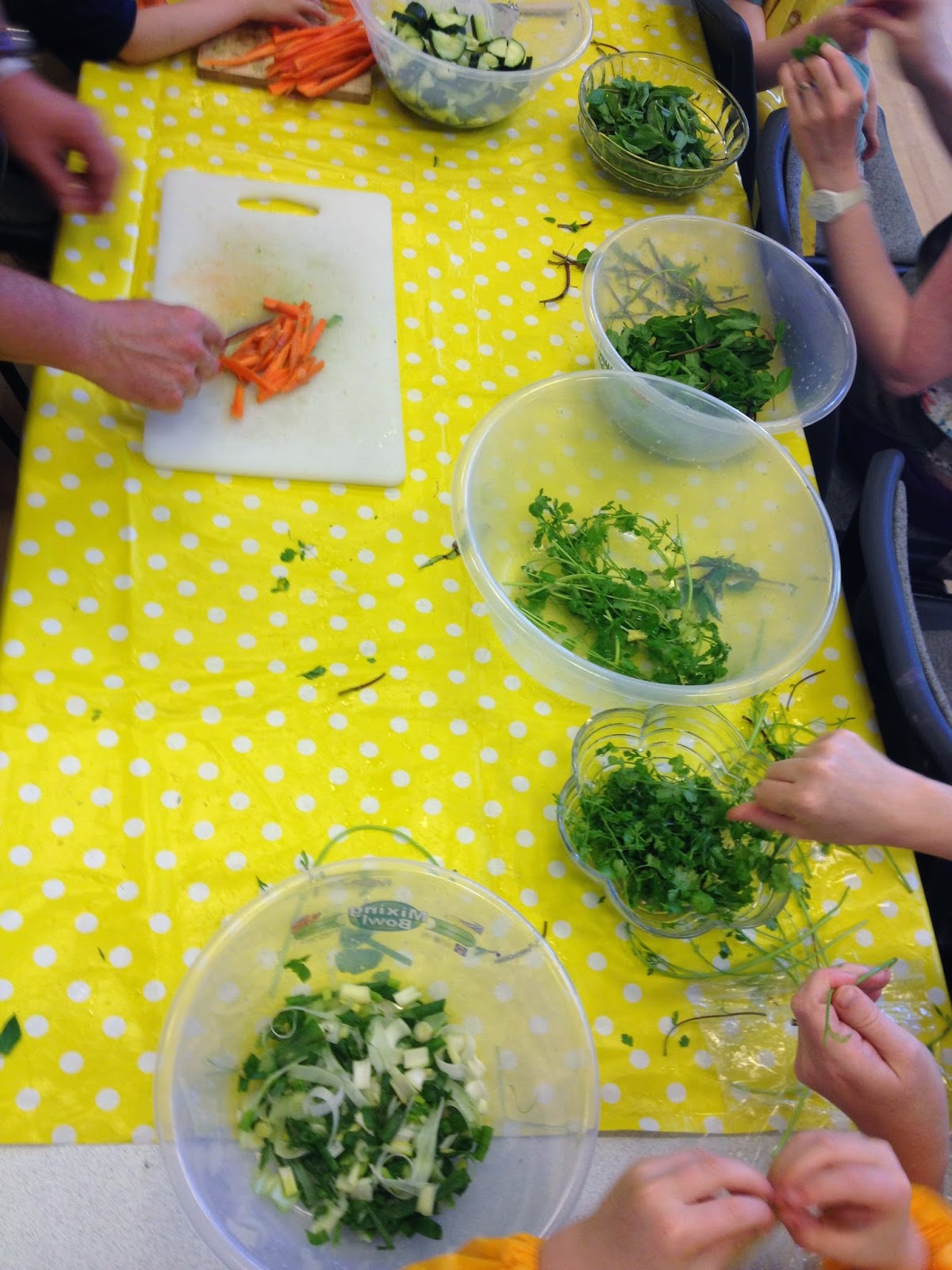 The next was busy with scrubbing potatoes, cutting, chopping, a sprinkle of rosemary and seasonings, drizzle of oil, tipping and coating - and the first dish was ready for the oven.

Onto the next dish with a bash and smash of nuts and fillings for the vegetarian wellington. 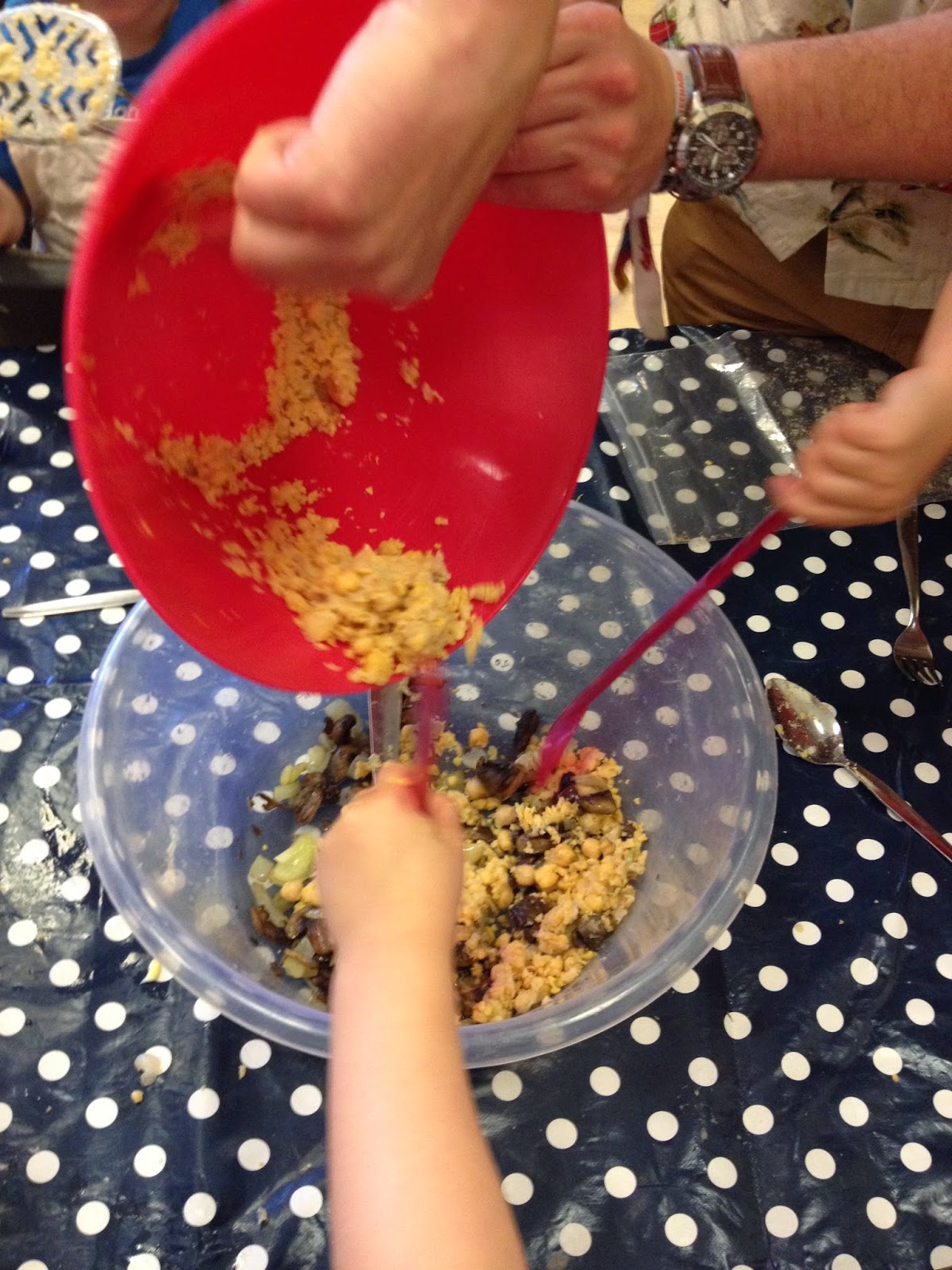 Now this is the tricky one – how to convey the sound of a food processor crushing peanuts for the summer rolls? Gzzzer? Schzuchhhh? Any ideas?

Sounds of wonder as they discovered the magic of a crisp textured Vietnamese rice paper turning into a ghostly white slimy thing once in water. Stretchy and gloopy; sticky and wrinkly. Shrill squeaks, squawks and pitter-patter of feet as the kids ran from station to station. 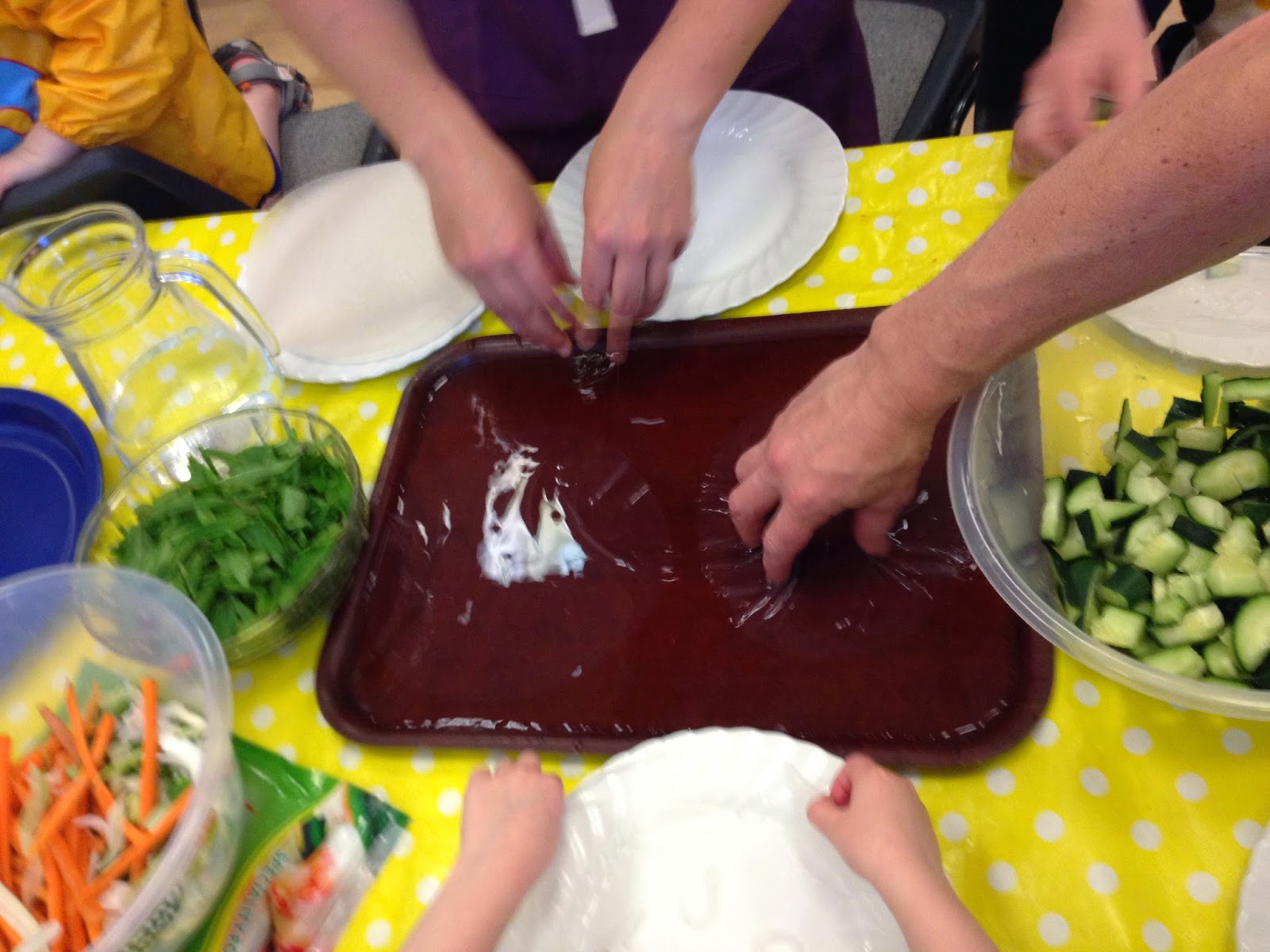 Clinking of spoons, mashing of chick peas. Tap, thump, shake as the filling components are brought together and tightly wrapped in pastry for the veggie wellington. 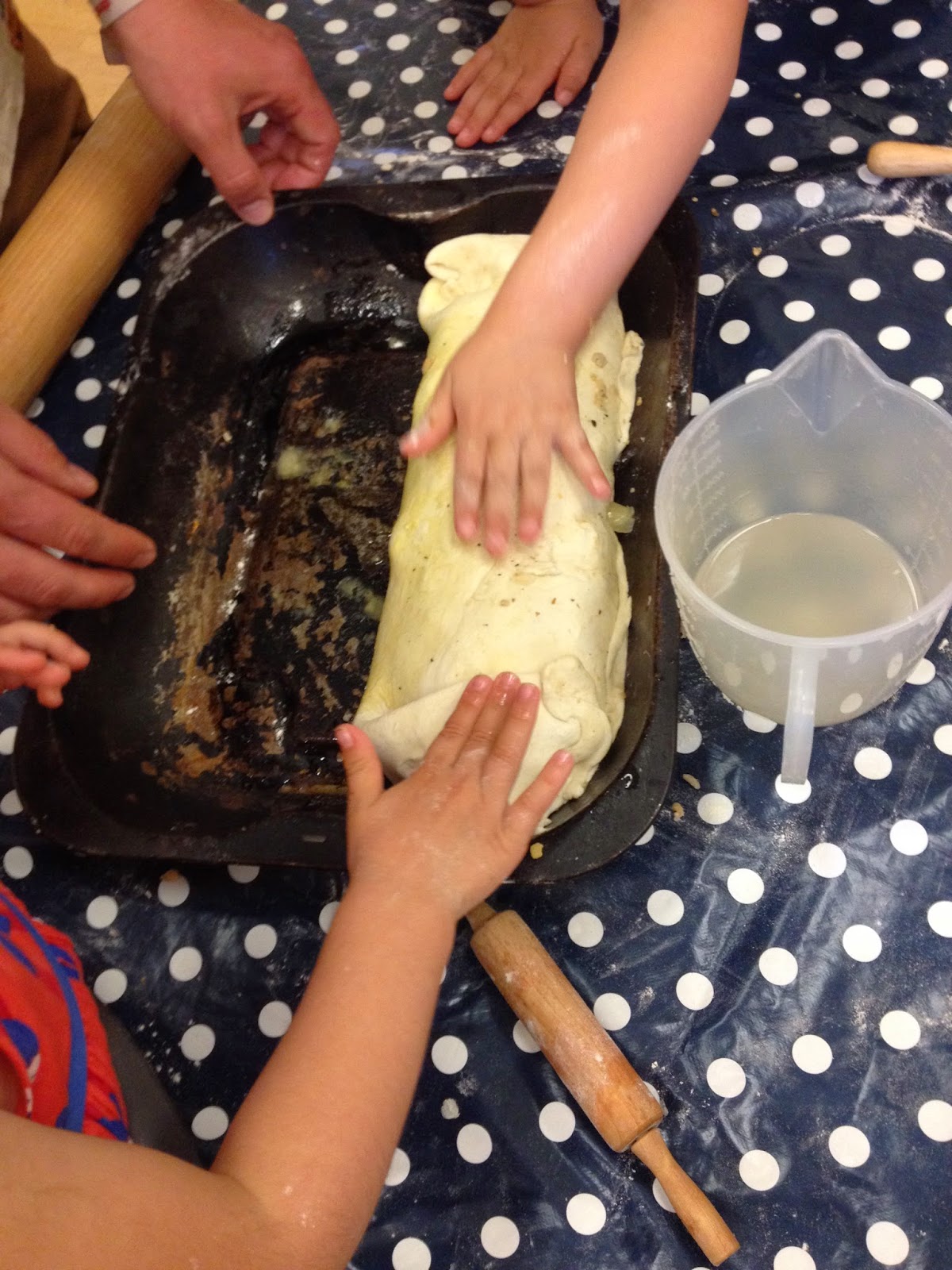 A quick break in the sun with refreshments to enjoy the lush garden, then back to work.

Looks of intense concentration, tongues poking out as they get to grips with selecting the summer roll contents and folding their creations up.

Large slugs carefully placed on the communal platter. One overzealous one in particular, I dubbed “The Beast” as it had to have its very own plate!

A tower of summer rolls wobbling merrily as everyone contributes. 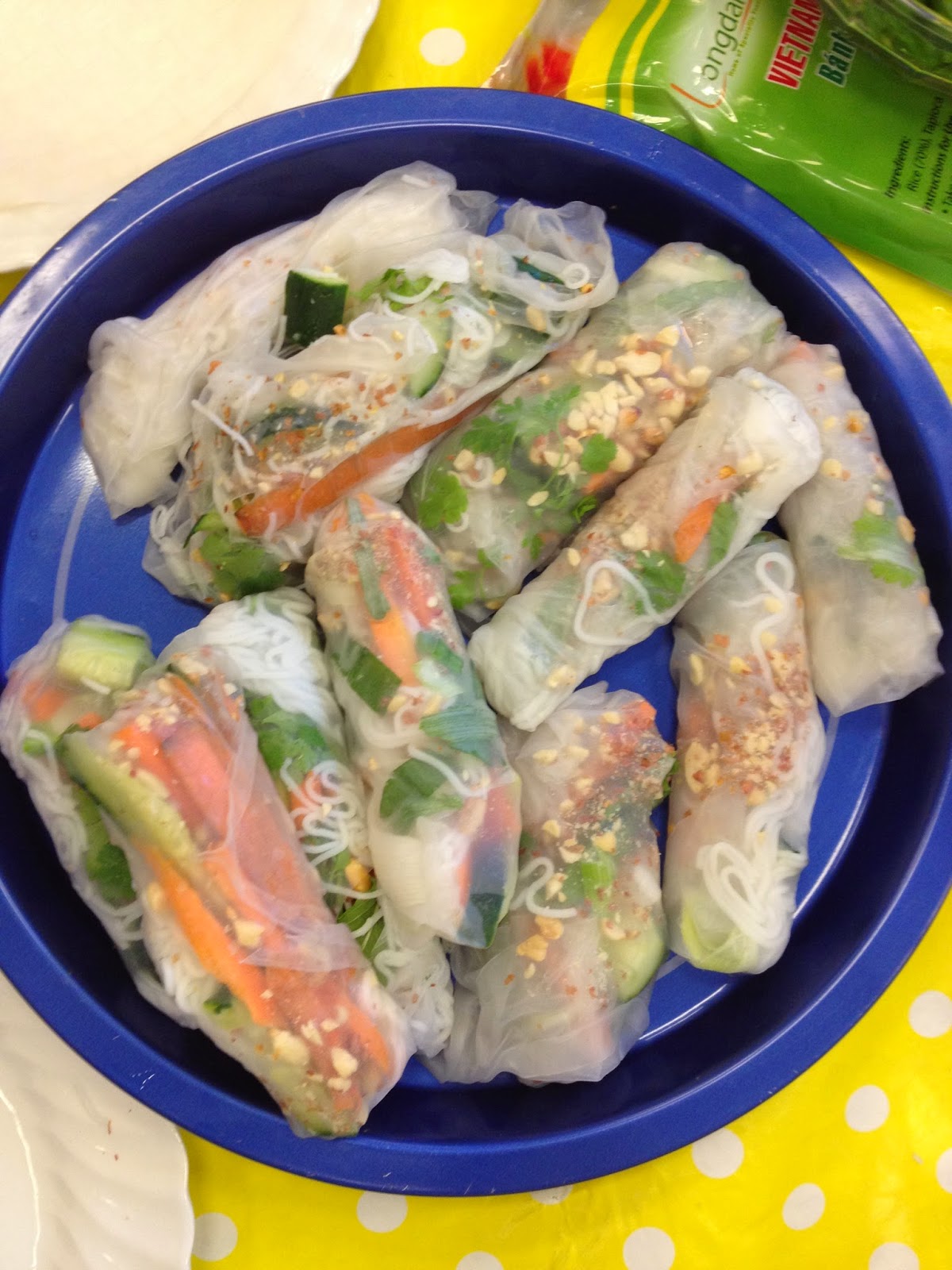 Dessert making started on the other table requiring more smashing, bashing, spoon crushing fun. Gentle sprinkling and off to the oven our rhubarb crumble went.

A quick tidy up and then... 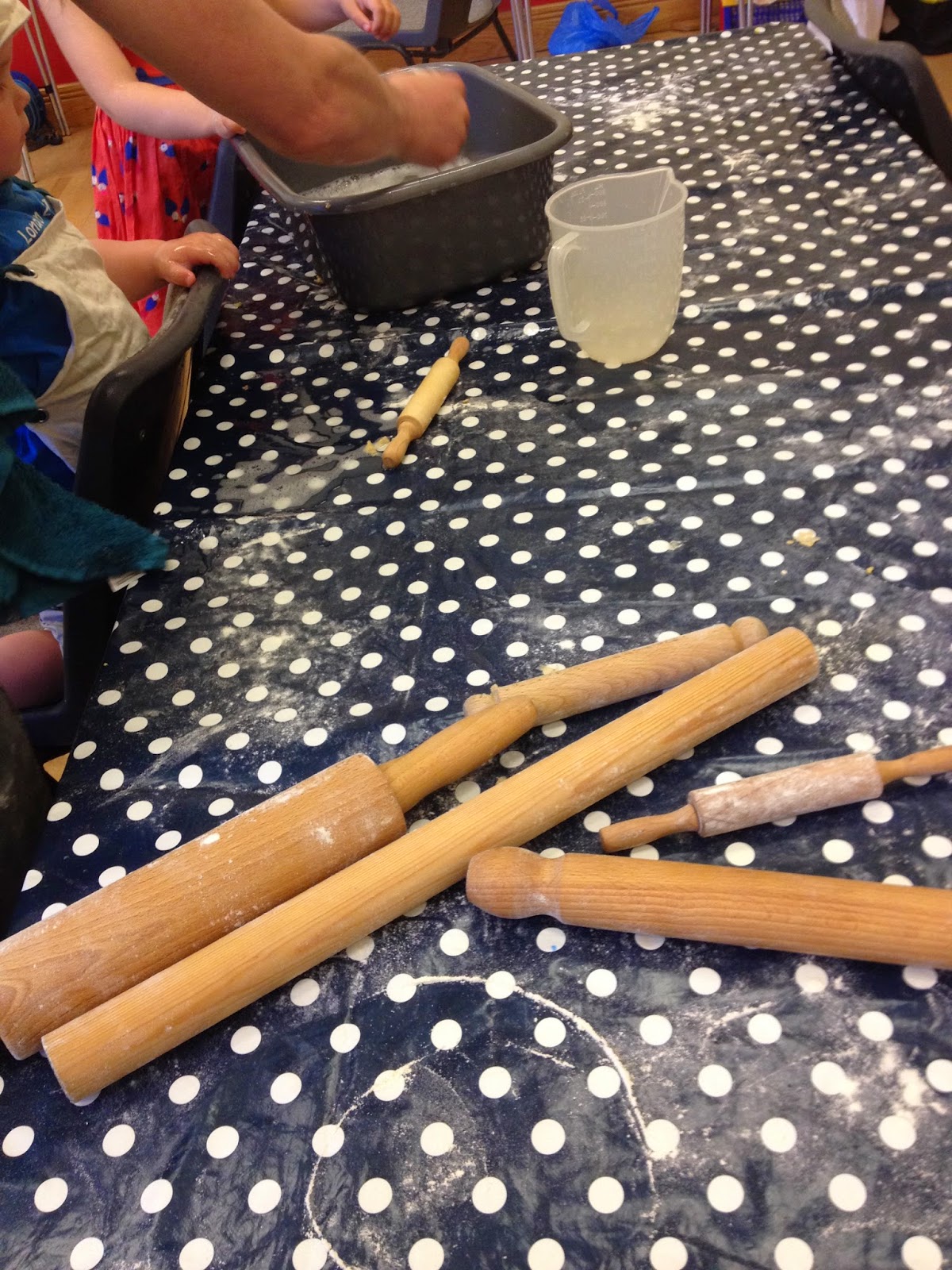 ...An animated story time interlude calms things down as our lunch cooks. Tales to transport us to the exotic jungle, and the serene garden.

The clatter of crockery being taken to the trestle table. 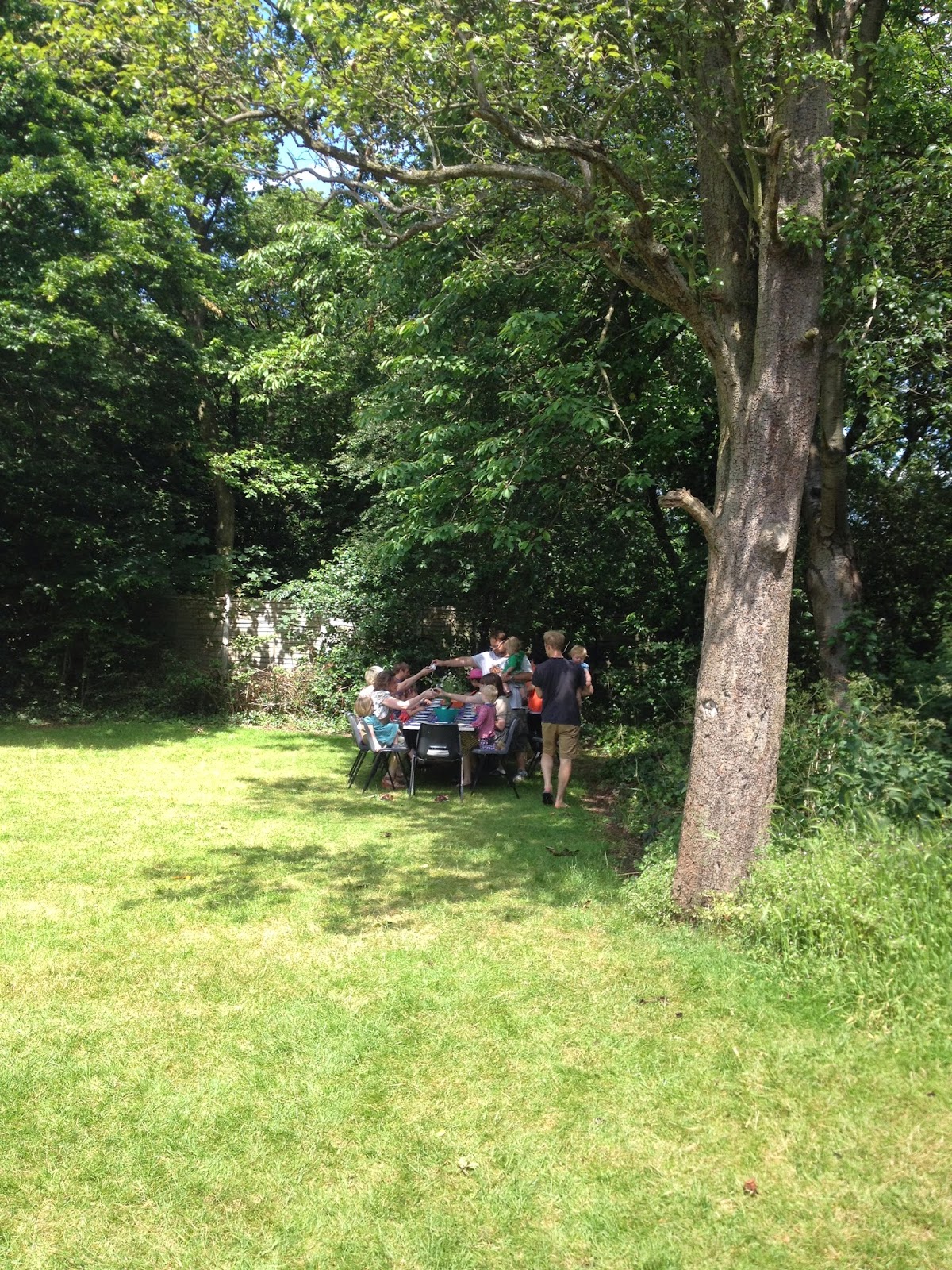 Glugging of delicious home-made elderflower cordial; bubbling conversations flowing mixing with gentle gasps of admiration as the food is passed around. Particular oohs and aahs over the salad with vibrant edible flowers. 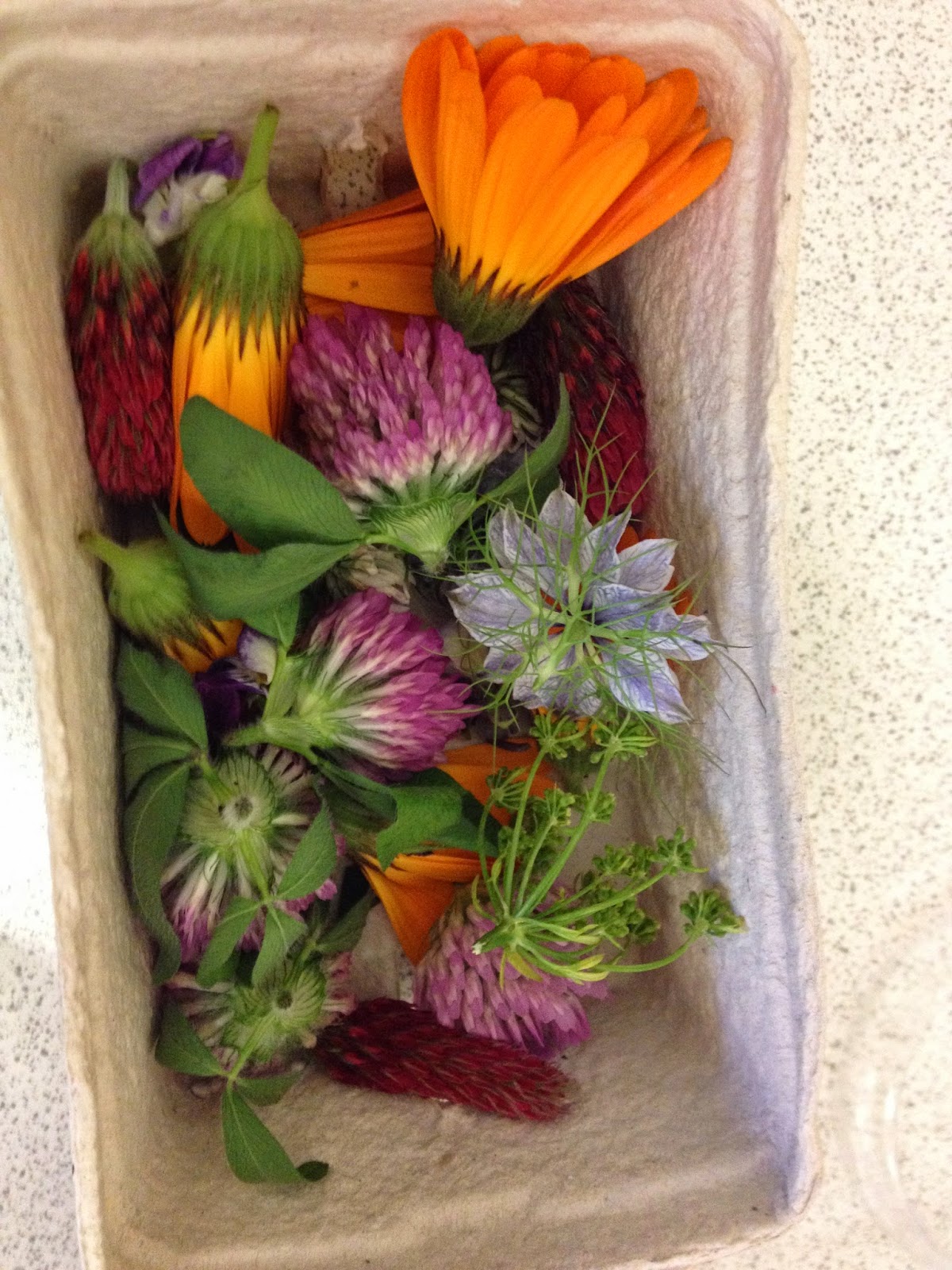 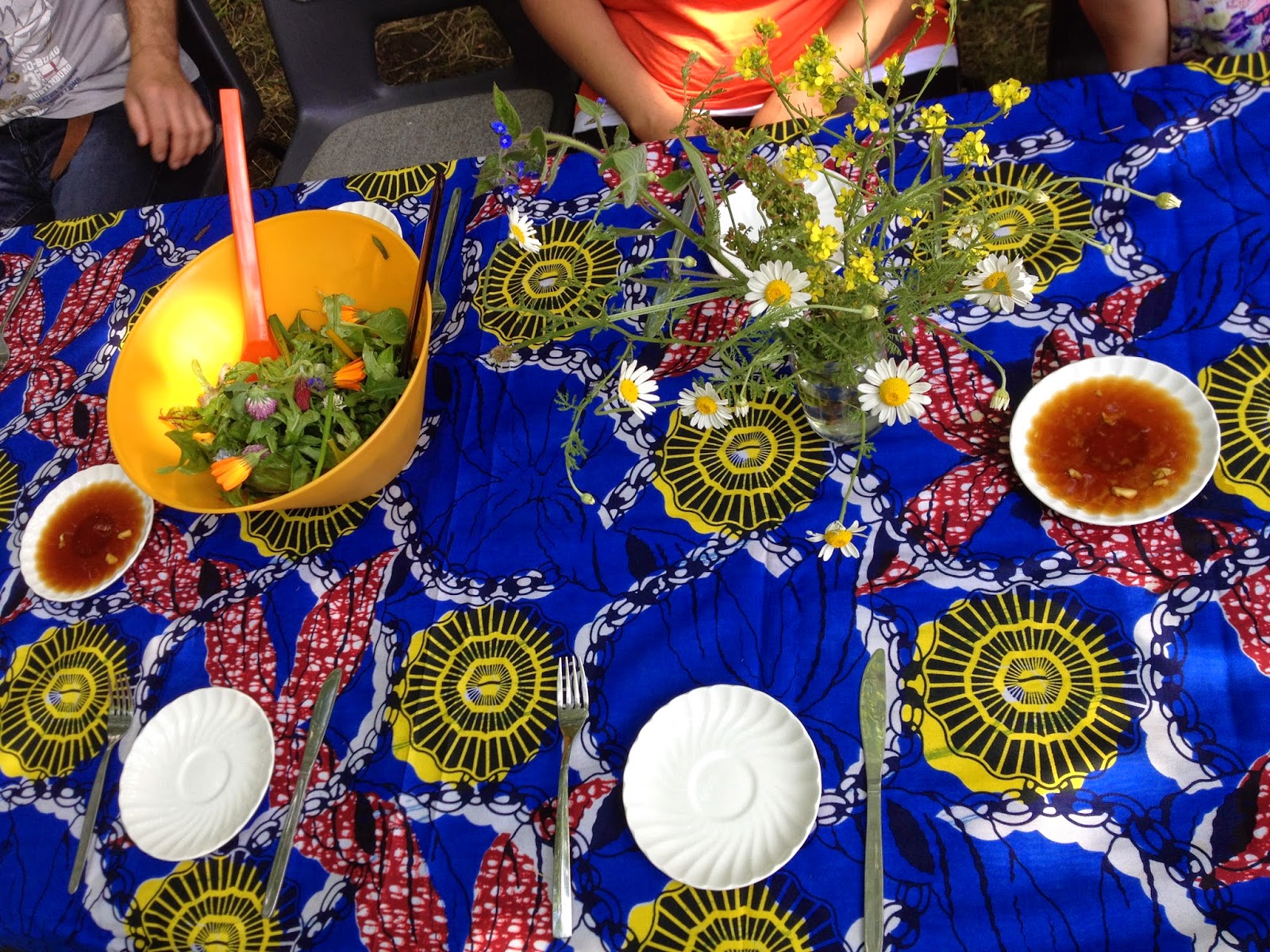 All too soon I had to sadly jet off to my next engagement, but not before a quick bite of piping hot rhubarb crumble.

The food was impressive and most importantly yummy, and all the more so for having been loving prepared by so many little fingers. Having prepared it themselves and taken pride in it, there were no complaints from the mini munchers!

For more information on Kids’ Kitchen and the work they do, please follow this link: http://kidskitchenlondon.wordpress.com/