Sadly I haven’t had as much time this year compared to last
year for seeing as many venues and meeting as many artists as I would have liked. I did my best though to fit in as many as I could in the final afternoon though.

Here’s a quick round up of my manic run around Walthamstow
(it’s good I knew it so much better after last year’s racing around E17)!

I filled up on a hearty and delicious lunch at Bygga Bo, a favourite café
from last year with their sublime toasted sarnies, who unfortunately were too
late to join up this year - we hope to see them return next time.

Just next to Bygga Bo, it was be rude not to pop in and see their photos adorning their burgeoning produce displays. I liked the "On the buses" and the "Mork calling Mindy" photos best.

I’d heard a lot about this last year and was keen to see it myself this time, so I headed straight for it and was pleased that it lived up to expectation. This year’s theme was Roald Dahl’s books and it was such fun to join others on the street pick out each of his iconic stories! The clever Howard Road folk had covered all his books from Charlie and the Chocolate Factory to James and the Giant Peach, the Twits were there, as was The Fantastic Mr Fox and the BFG. All the favourite characters and some less well known ones such as the Vicar of Nibbleswicke and Esio Trot. I didn't make it to Dr Knit and the Knitting Laboratory this time, that'll have to keep for 2016!

I ended up leading a happy duo towards the closing party. Enroute we spied the Lady of Shallot in the graveyard - a little eerily it must be said.


4. Paul Tucker at the Ancient House

I stopped off at the ancient house to see inside and Paul Tucker's beautiful photographs, an exhibition of "Ancient History." The smell of a BBQ was slipping in from the paved courtyard lending another dimension to the display.

I rejoined the merry band of art seekers and picked my way through the higgledy piggledy world of the secret garden.


In the final minutes before the closing bells, like Cinderella I slipped into the Fairy Tale Folk gallery to glimpse the remaining fairy tale inspired photos. Alexis' favourite one about Cinderella had already been collected, but there was plenty to feast my eyes upon. I particularly enjoyed the witty captions that went with the photos. Such as "Farewell to a Hackneyed past" looking back at Hackney.

On my way back to the after party I detoured to squint through the railings at some lovely local artistry based on illustrations. The photos were taken with considerable risk of dropping my phone the other side of the railings and having to return when school reopened!

For some much needed gin, raspberry vodka was my favourite tipple closely followed by the rhubarb and gooseberry and elderflower. I loved the artwork from Fletch Fletcher. He has a similar style to mine, observing the beautiful and quirky in the mundane. His exhibition was entitled "The search for beauty in the ugly."

En route to the school I saw the first of the Where's Wally treasure trail. It looks great fun and I look forward to using google to have a look at it at some point. All those who contributed were entitled to a limited edition map which looked fascinating.

Phew! As expected all of the free nibbles from Yum Yum E17 had been gnawed away, but there was still drink a plenty and some final art pieces from Hatch to admire on the walls. Also importantly, lots of familiar faces to greet and catch up with.


What a great E17 race, you all pulled the stops out and I can't wait for The Walthamshow Garden Party. Bring it on!

I do hope to see you there – be sure to say hi if you see me! I'll be sure to clear my camera as it certainly got full with all your great artwork this time around.
No comments:

After my silver ring workshop I popped my head around into the maze like warren of City Studios, discovering stone carvers, painters, jewellers and in one case lured by the smell of toasting bread, a collage artist. 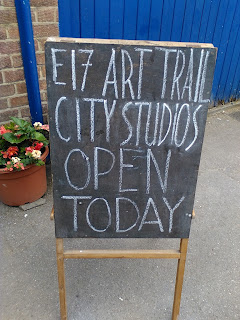 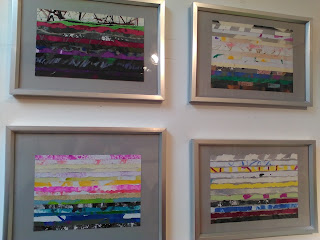 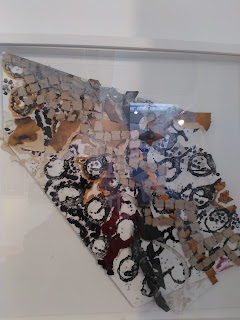 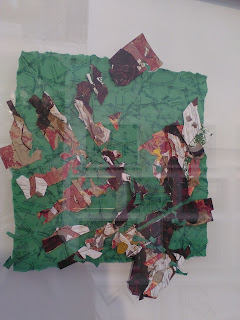 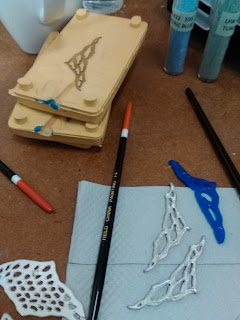 The Makers' Yard is another tucked away studio set up, this time in a secret garden. They weren’t kidding in the booklet when they said about an uneven surface, it had crazy paving gone wild! With the sun shining it was a beautiful little sun trap with artwork displayed outside, hanging from the tree branches and inside a series of garden sheds. 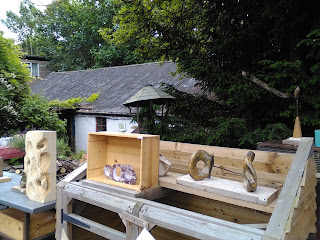 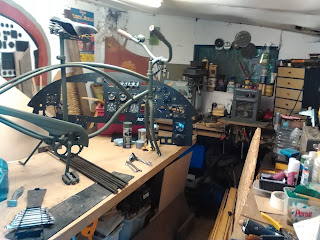 Creative Appetite Post: 10 Step Guide on How to Make Your Own Silver Ring with Made By Ore


Having first met Lucie from Made by Ore last year, I had been wanting to visit them for a while. I was therefore delighted to have a booking with them to make a hammered silver ring in a Sunday morning workshop in City Studios. Caren and Samuel greeted us with friendly smiles and bundles of patience for our morning of creativity in their studio. 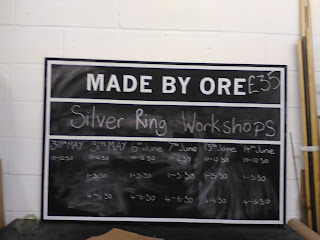 Here’s my quick "how to" of how I converted a short piece of sterling silver wire into a beautiful ring I’m surprised was so simple to make and I now enjoy wearing daily.

1. Practise on a piece of copper to get a feel for different techniques.


2. Promote yourself to sterling silver. As this is more expensive the measurements to avoid waste need to be taken. Measure the size of your chosen finger. Careful not to get your finger stuck like I almost did! 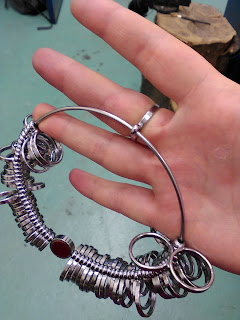 3. Get mathematical: convert your measurement with the use of a calculator and good old pi into a length for the diameter of your ring. 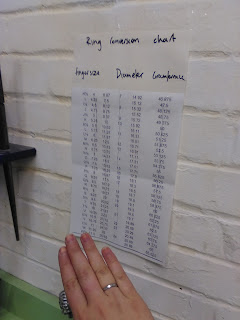 4. Get the piece cut and start adapting. There was a choice of hammering, using the mangle or both. I felt I didn’t have quite enough time practising with my copper so I ended up being a bit more experimental with my silver than others might have been. I started with pressing it with paper to get a matt raised edge look, then some leaves which didn’t show much, then a “little miss naughty” sock which gave an interesting slightly raised profile, and finally on the outside a William Morris-esque flower pattern.


5. Choose which is your inside and your outside.

6. Customise any final details. I hammered in my initials and the date in Roman numerals. 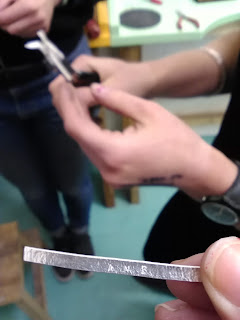 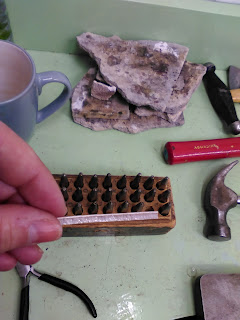 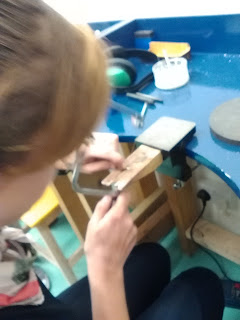 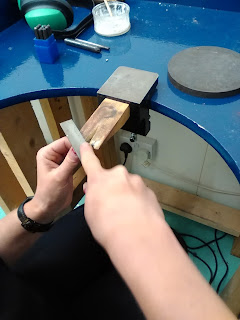 8. Shape roughly. It is important to get the ends flush against each other. 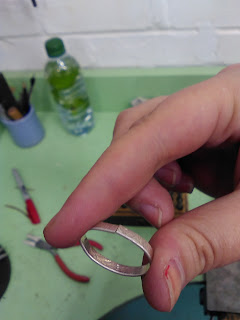 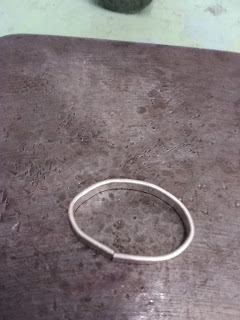 9. Solder, wash and pickle - yes there is a stage called "pickling" to get the ring all shiny.

10. Rinse, collect and hammer into a rounded shape 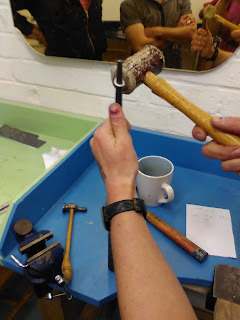 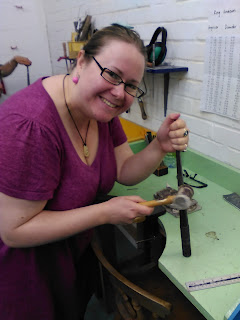 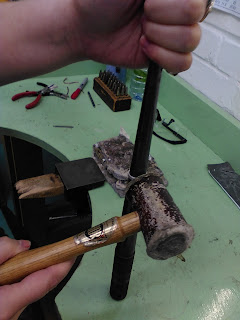 Here’s mine (at the back) with two others made that morning in just 2 ½ hours! 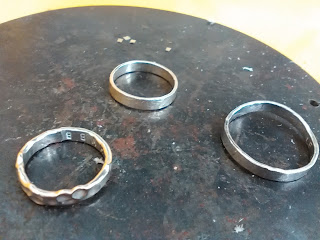