What an amazing first week of the E17 Art Trail. My only complaint is that it is going too fast- my fear of missing out has not abated. I feel as if I am cramming for an exam. I have realised that the best approach is to pick a few things and immerse yourself properly in them. At one point I was even in someone’s bath tub! But more about that later...

I was so happy to see Emma Scutt’s exhibition ‘Celebrating Women in STEM’ where I found out about the physicist and mathematician Katherine Johnson who worked for NASA, calculating flight trajectories for Project Mercury. I have learned so much from the trail this year, which has been an unexpected bonus. Scutt’s portraits are so alive and bold, if you get the chance to visit St. Mary’s Church I would highly recommend taking a look.

Across the borough in another church I was taken aback by the radical nature of the exhibits. I had never visited St Barnabas although have been aware of the progressive approach that is taken there- including their work with migrants and LGBT people which is really heartwarming. This attitude is reflected by the choice of art on display, which promotes the idea of ‘Building Bridges’ across the community. Eliyah Qureshi’s ‘Gold Standard’ series which is driven by the idea of bees and the networks they create represents this idea beautifully- the paintings are really joyful. 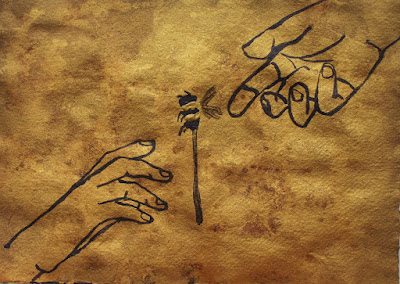 Off to Winn’s Gallery in Lloyd Park, where ‘The Truth and The Truths’ showed ‘fake’ paintings by Travis Perkins. These were fabulous renditions of famous paintings that were actually very desirable as well as affordable. Some of the takings were also destined for the Labour party which was timely.

The following weekend after popping in at Mirth Marvel and Maud for the E17 Designers fair which was a  real treat, I travelled back to Winn’s for the Invisible Numbers exhibition. This was an absolute blinder, showcasing six artists, a design studio and a historian, each exploring their interpretation of the theme of STEAM. This included jewellery and mask-making, incredible paintings of rope-spinners by Denise Ford, the story of an unknown local computer engineer from E17 and much much more. I was lucky enough to see a talk by mask maker Rebecca Ward, who talked about the varying functions of masks from around the world which was fascinating. 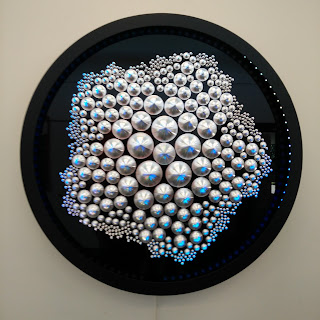 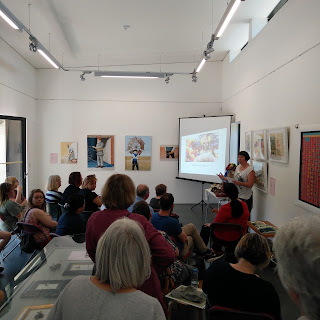 Hewing Wittare was next, and I found another ‘mask’ there, although it was really a sort of large heavy anthill which I put my entire head into. The house was decked out in gold crunchy foil which made it quite warm and alien. There was some sound art in the bathroom so I duly got into the bathtub to listen. It was very relaxing and I was in there for some time. Lots of excellent art on the walls by Anna Liber Lewis which contributed to the overall feeling that I was suddenly on a spaceship somewhere far out in outer space, which is exactly what you want from an art exhibition. 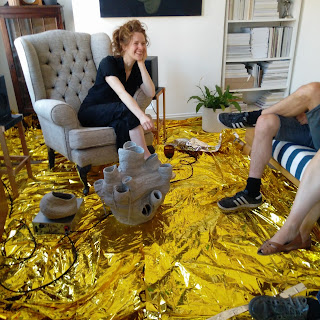 After all the excitement it was really nice to head to Cheeky Handmades to see Sean Urquhart read from his new book. I always enjoy hearing his mellifluous Scottish accent and it was a treat to finally see Jennie Caminada’s craft studio which is wonderful.

Rose Richardson’s maps of London are worth going to have a look at, showing how the Thames has evolved throughout time. The maps would make a brilliant gift idea. 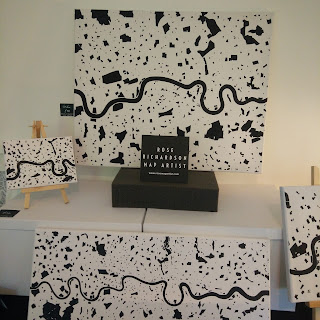 Finally I popped in to see John Bain’s extraordinary hand carved furniture, as well as the sculptures of Ellie Noble at venue 26. We had a good chat about Burning Man Festival, Japan, Epping Forest and more and admired the beautiful oak table that was on display. The work marries modern and traditional methods in a really interesting way. 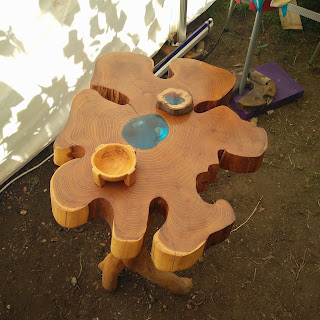 There is so much more to see, and I will be doing my best to see as much as I can. The Art Trail is on until the 18th June so there is still plenty of time to go and explore. Happy wandering!

To give audiences a head start an amazing 34 exhibitions opened early for preview night and parties broke out all over Walthamstow. Here is an account of the evening from our guest blogger, Emma Hammond, goodeggsocial.com

The fear of missing out was real! The E17 Art Trail Preview night was absolutely packed with interesting events, street parties and private views.

After some deliberation, first stop was Adam Graff’s photographic images of Walthamstow at Incoming Coffee. Taken from his Instagram account, the images celebrate the unseen parts of the borough. Like tiny windows in their smaller format, the pictures show little glimpses of everyday life and are raw and poetic. 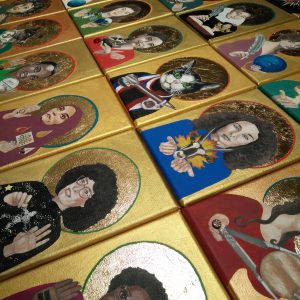 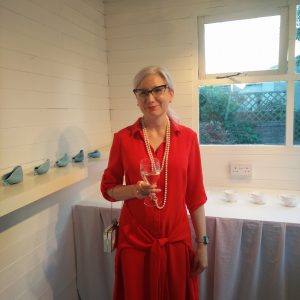 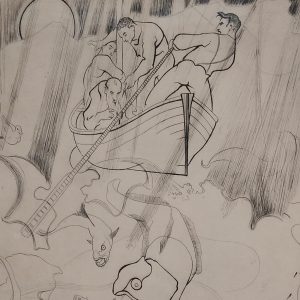 Next up was a trip to Central Parade to see Object Book’s launch of their ‘festival within a festival’. I would recommend picking up a guide as there is a whole raft of exciting things happening, from a ‘library rave’ to a workshop on how to make an edible fairy tale book. I had a go on the ‘audio book silent disco’ which was great.

Off to Ruby Road where a street party was celebrating Share UK’s excellent photos of women activists. A bowl of pesto fell on my new white trainers but luckily they were unscathed. Kids were doing ‘political colouring in’, the wine was flowing and the portraits are exceptional. From women’s rights activist Helen Pankhurst to Greenham Common protester Ellen Jones, there is much there to learn and see.

Popped in to No 70 Hoe Street and saw Harriet Knuckles’ crochet creations, one of which is a seagull smoking a fag which really made my night. Go and have a look as the pieces are super fun! 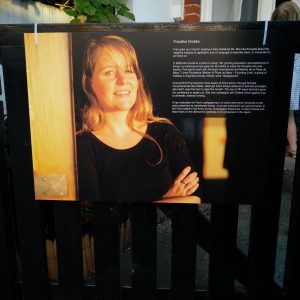 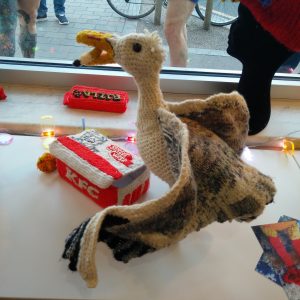 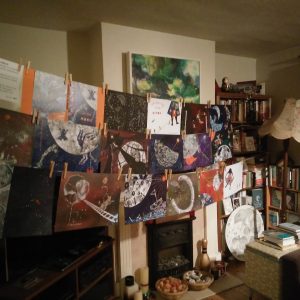 ‘Gentrification is Nigh’ at the E17 Art House was packed with people, it was hard to get in! More Adam Graff here doing Edvard Munch’s Scream as a head in the hole board as well as comments on the changing face of Walthamstow, by Tim Reedy and Danny Flynn.

Spent some time with Amanda Doidge in her little studio, learning about how she made her experimental ceramics. Using Lithium Carbonate in different amounts causing various distortion to teacups, she has created a series that is both delicate and bizarre. Amanda is also putting on a series of talks about chemical processes that are worth looking into.

Francis West’s engravings in the Walthamstow Village Window Gallery are absolutely exquisite. I am sure you will walk by them on your way to work! I really enjoyed looking at these, the mythical creatures, performing animals and fishermen are so vibrant and alive they are a real joy.

I was so happy to see Chloe Beale’s photographs of Dungeness in Kent as they reminded me of the time I spent there on holiday. Dungeness is a remarkable place and Chloe has really captured the magic and eeriness with her striking images.

The last stop (after dinner at the Deli- the Village was buzzing and it was a beautiful evening) was to see Lucy Henzell-Thomas‏’s ‘Icons of Women in Science’. I highly recommend you going along to see these if you can, I learnt so much. Many of them are fairly obscure, from Maryam Mirzakhani to Chien-Shiung Wu, so I will be doing some Googling today! Also represented here is Laika, the first dog in space and we took some time to imagine her reaction as she hurtled through space. Also being shown was ‘Wondering on the Moon’ a collection of illustrations exploring folklore and facts about the moon. I think kids will love venue 135!

This is just a very small snapshot of preview night. It has definitely made me extremely excited about the next few weeks and I can’t wait to catch up with the many other venues. If you haven’t already, get hold of a guide and start some planning- you won’t regret it.
No comments:

One in five Walthamstow Residents taking part in the E17 Art Trail 2017!

Over 7000 artists, residents and workplaces in Walthamstow invite you to enjoy every element of the E17 Art Trail 2017. Infused with a STEAM theme, painters, sculptors, poets, choirs, photographers, designers, ceramicists, and dancers welcome you to enjoy exhibitions, performances and workshops in the studios and streets, parks and pubs, cafes and shopping centres, faith spaces and community places. (STEAM is the acronym acknowledging the influence of creative disciplines in STEM subjects: Science, Technology, Engineering, Art and Maths.)

The non-hierarchical nature of the E17 Art Trail and its democratic invitation to participate means that professional artists exhibit alongside 23 schools, colleges and under 5’s centres. A resident-led project, 1000 Swifts, is encouraging even more local people to take part in the festival by making and displaying a swift in their gardens or windows to celebrate the Walthamstow Wetlands, the largest urban wetland in Europe opening later this summer. 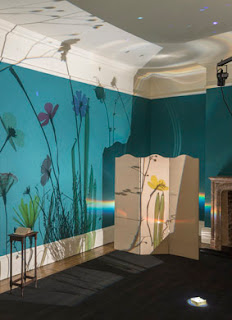 This year artists have been collaborating with academics at Queen Mary University of London, University College London and Birkbeck University of London to bring new technologies and a talks programme to the festival. Explorations include painting with light, local connections to coding early computers and searching for the building blocks of life in space.

As in previous years, the opportunity to discover artists’ workspaces in studios, workshops, sheds and open houses is a big draw for audiences, inspiring them to realise their own creative ideas. The E17 Art Trail offers a supportive platform to test ideas and the audience are an integral part of developing new work. Many projects will go on to be showcased at festivals and exhibited elsewhere over the summer months, including the Walthamstow Garden Party and the Barbican Centre.

The Trail Guide is available from participating venues, Waltham Forest Libraries and online here.
No comments: