In true Summer Garden Party style, the sun blessed the opening day of the Artillery Island and Walthamstow Garden Party with heat and summer smiles. Perfect weather for a picnic with friends and family.

Sheltered from the intense heat on an island in the middle of the Lloyd Park medieval moat under a white canopy lay an arc of Walthamstow and local area’s finest food creators sharing their summer selections.

I sussed out those who were there for one day only and made a beeline for them before they all sold out/melted – that’s food or the people!

Seriously Italian, award winners and regulars at the Walthamstow Farmers’ Market had both their colourful fresh pastas on sale and their homemade pestos out for testing. 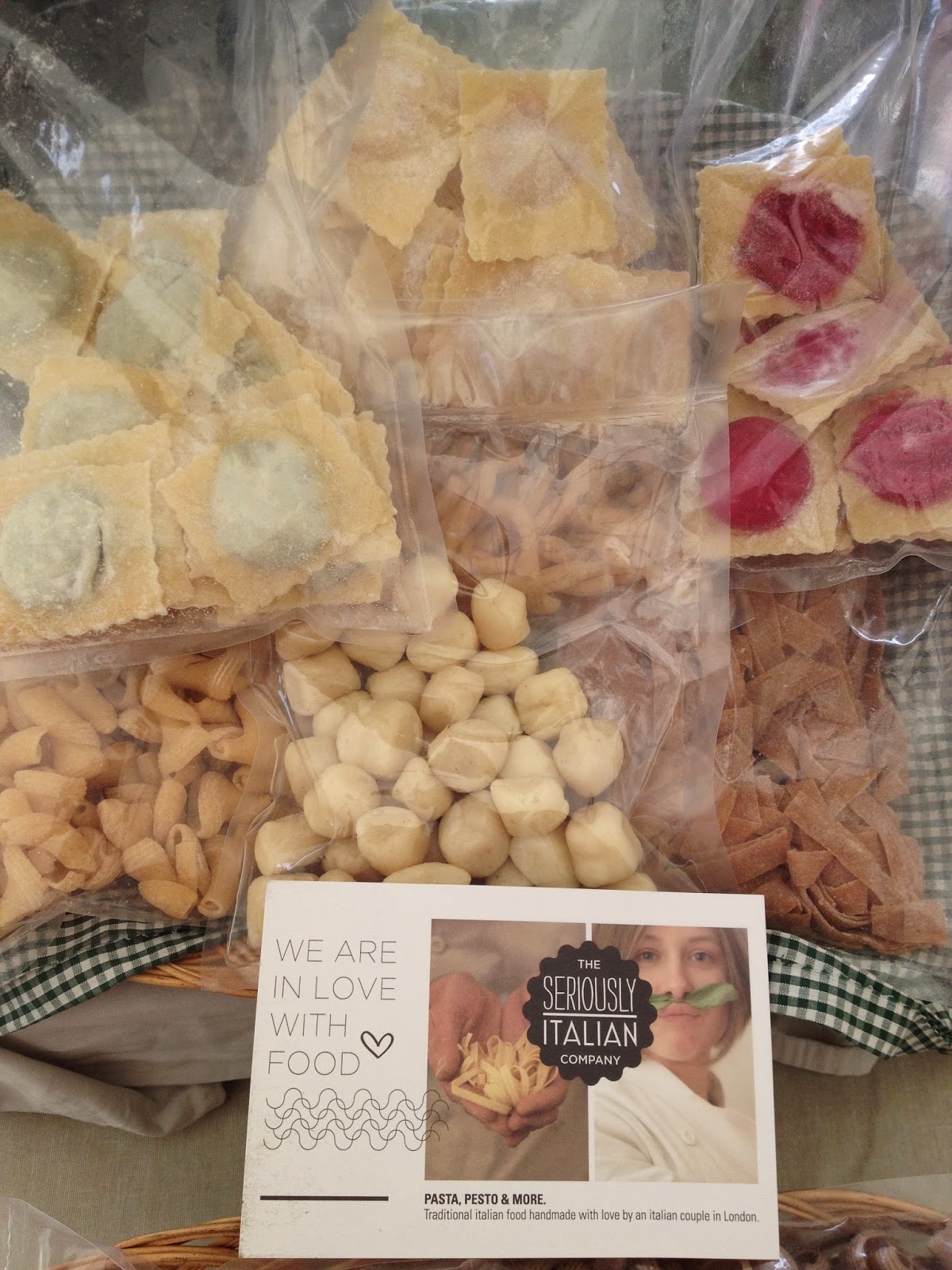 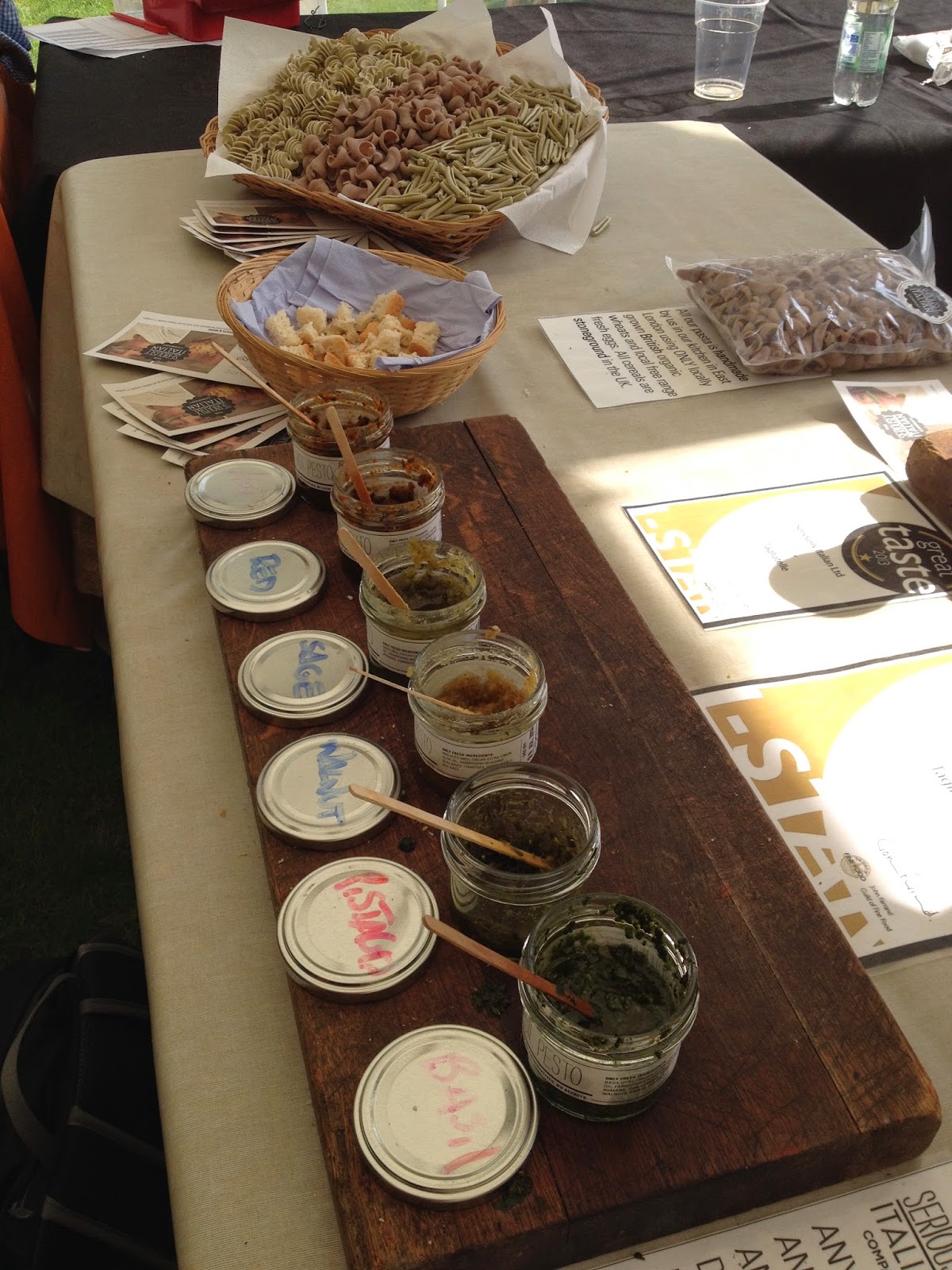 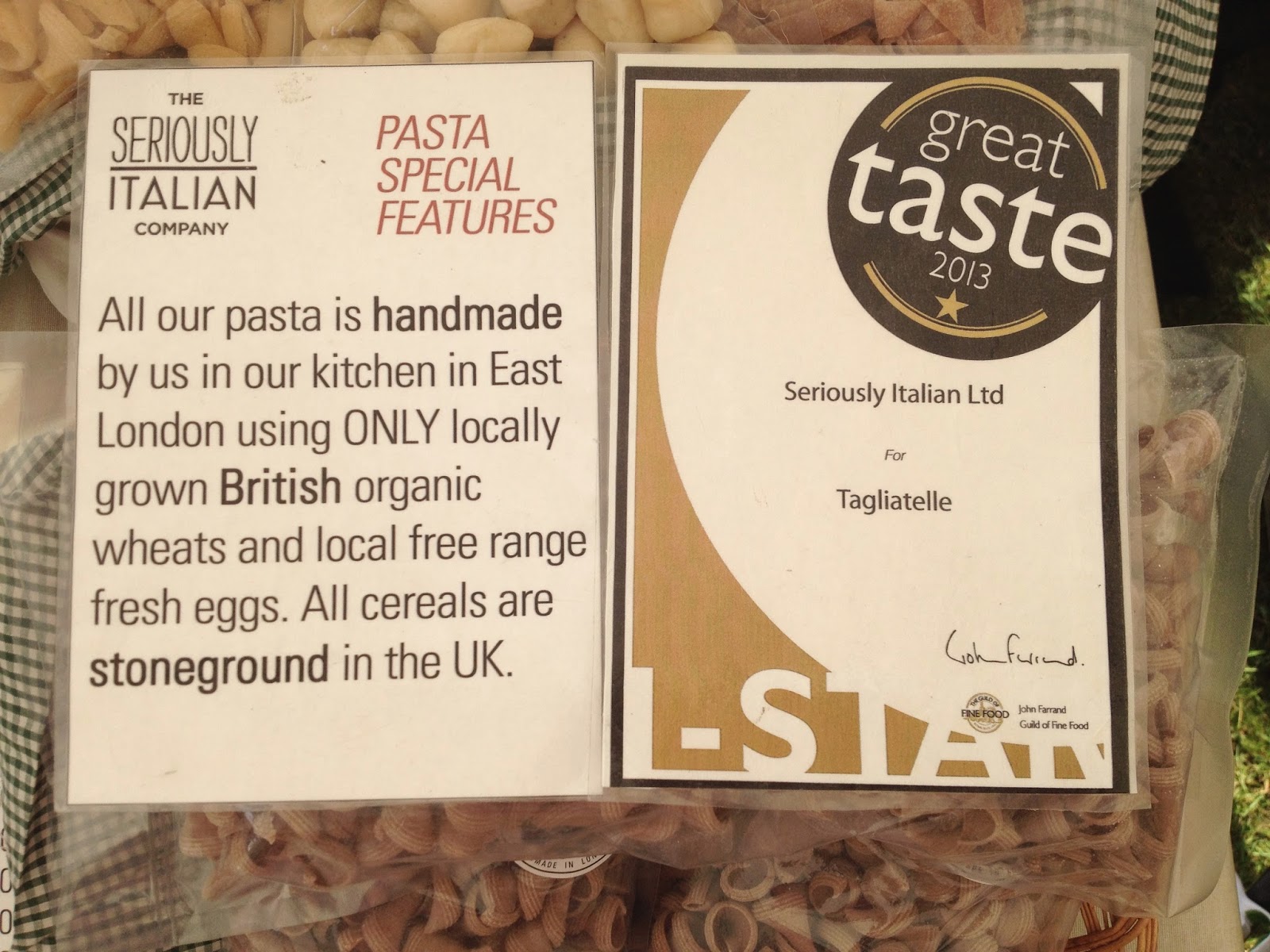 I liked the green vibrancy of the basil pesto and the nutty flavour of the walnut pesto.

Eat 17 were back with their bacon and chorizo jam, this time partnering up with The East London Cheese Board for canapés. So popular, even as they were packing up they were inundated with requests for samples. I wrote a piece about them when I visited them during the 2014 E17 Art Trail earlier this year here: http://e17arttrail.blogspot.co.uk/2014/06/following-my-nose-in-walthamstow-village.html; http://eat17.co.uk/; http://www.bacon-jam.co.uk/. Babooca (pronounced Ba-boo-car as it stands for Bakes, booze and cakes!) brought another element into the stalls of homemade sweet and savoury pastries with a global theme. Limited edition French inspired ginger and almond sweets and Moroccan sesame giant cookies, through to the Greek feta and spinach parcels and fiery “Dragon Samosas.” When asked, Selina from Babooca said that the Dragon Samosas with Scotch bonnet chilli heat are her signature savoury along with her Five Root cake. The cake sadly wasn’t available but I was been told it got its name from containing carrot, beetroot, parsnip, sweet potato and ginger along with a host of complementing spices including cinnamon. You can hunt Babooca down at various festivals and you can learn more here: http://www.babooca.co.uk/ 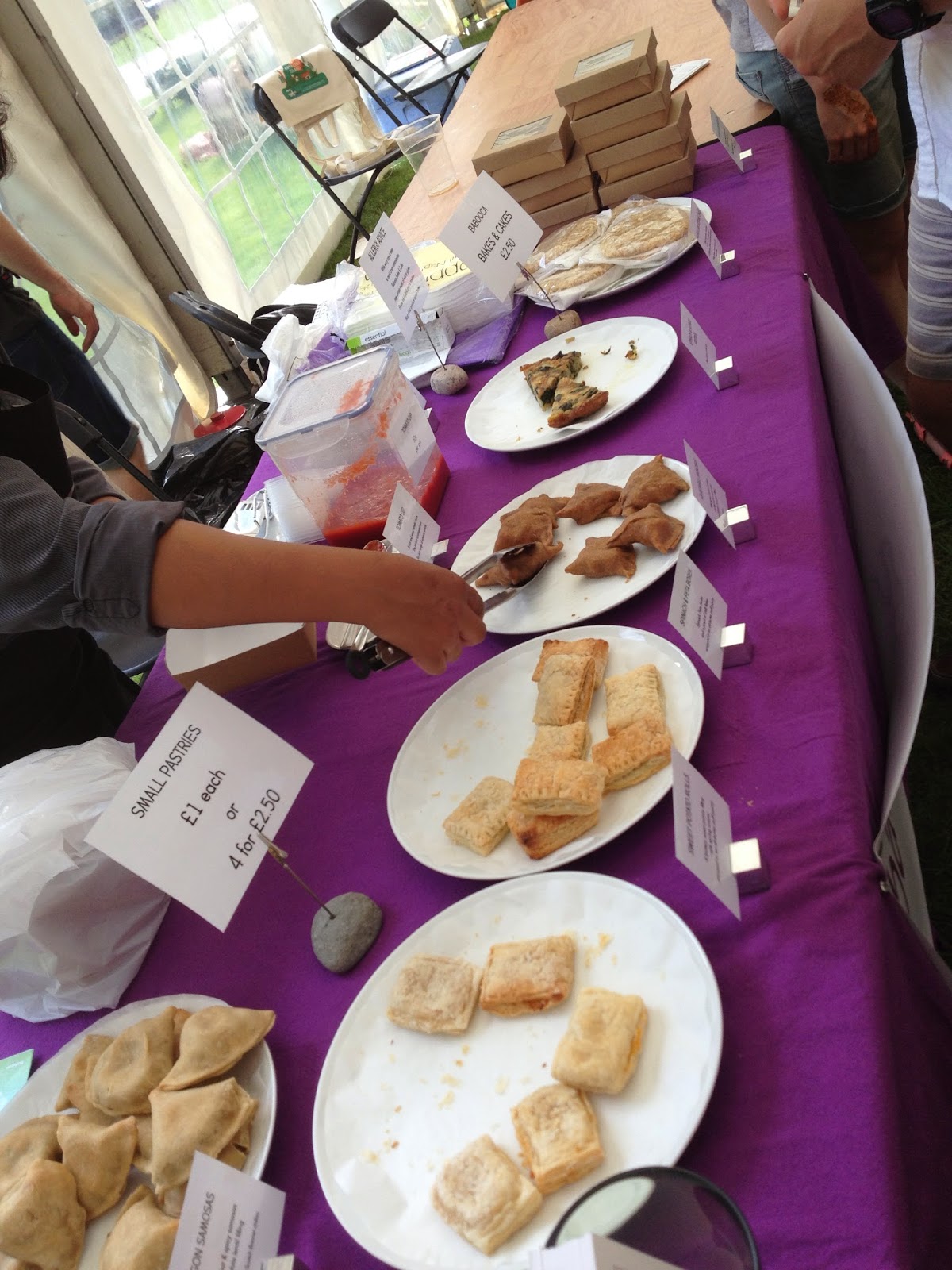 Stepping Lightly Foods are all about locally sourced and fairly traded, using Fairtrade where they can including sugar, bananas and chocolate home-made food by Gill Moody. Gill was showcasing her broad array of preserves on this occasion, including my favourite the pear and chocolate spread with real chunks of locally sourced (from her neighbours if I understand correctly!) sweet pear. 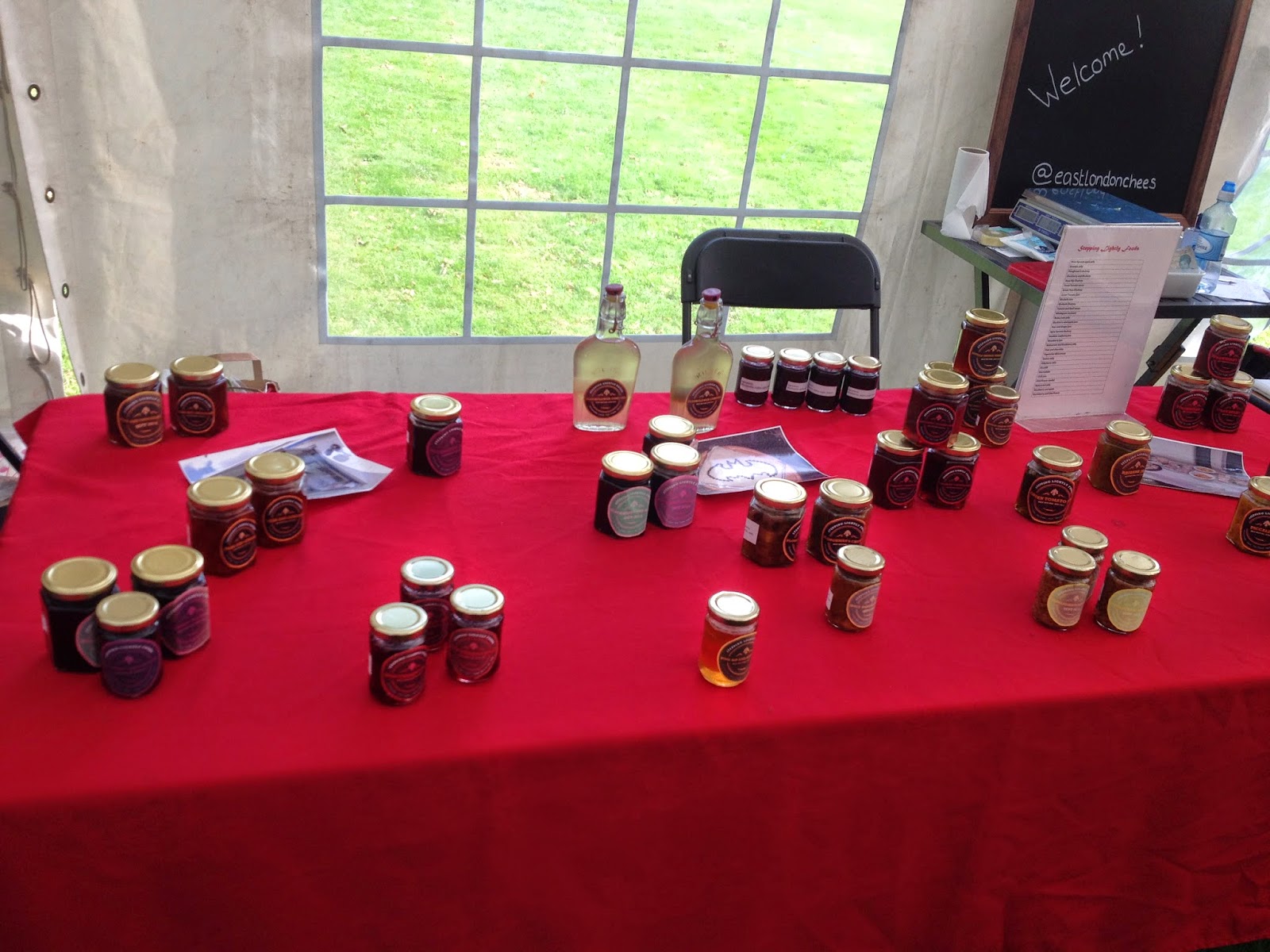 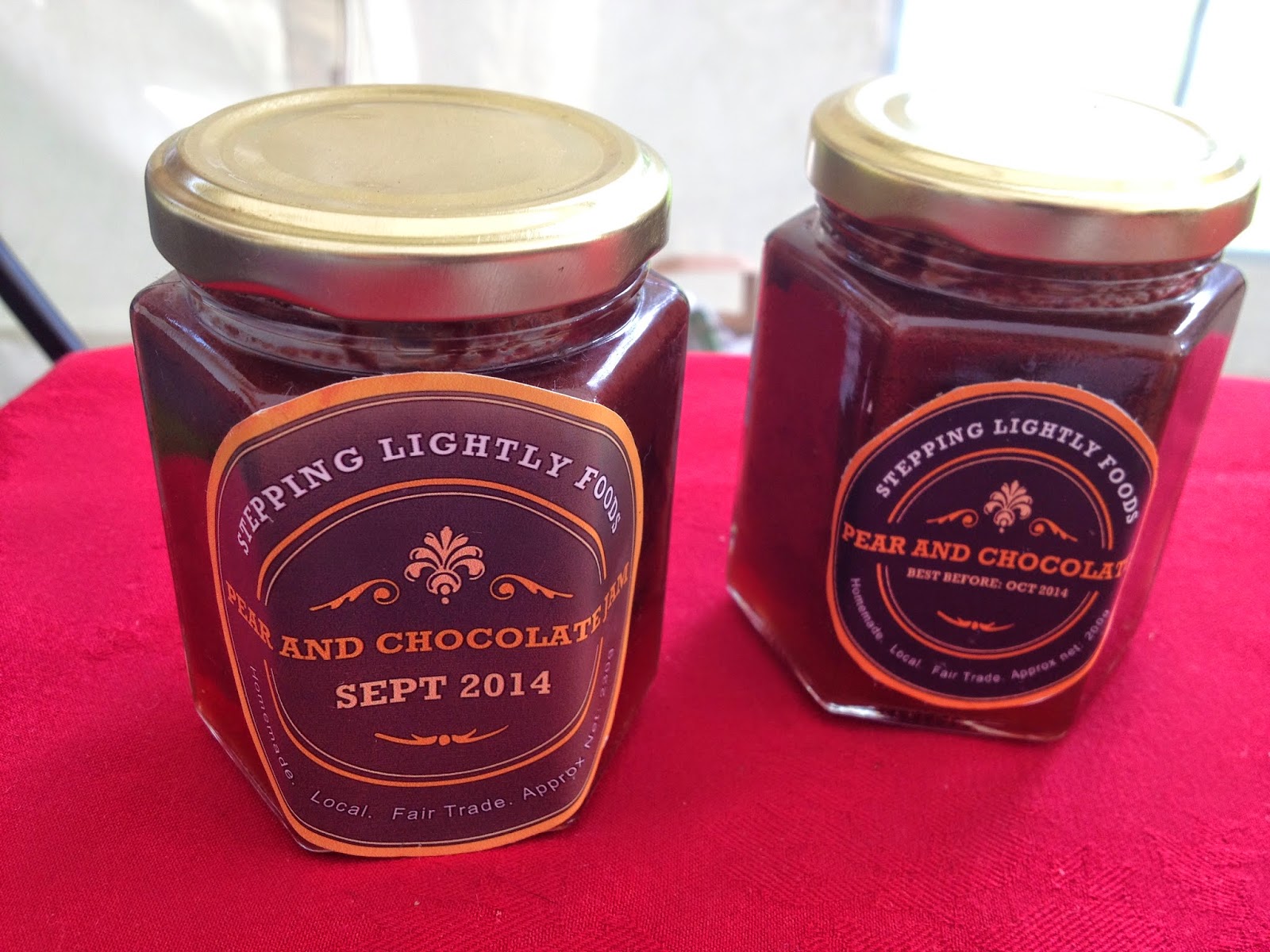 Her favourite currently is the Seville Orange Marmalade. In fact you can find the recipe to it on her website: http://www.steppinglightlyfoods.co.uk/#!recipes/c3zk.

Finally, Potcy Cold Store: an interesting concept and much appreciated on a roasting hot day like Saturday! An enterprise set up by Michelle to introduce some more novel flavours into the frozen yoghurt and popsicle market. On offer were creamy yoghurt with unlimited choices from: fruity compotes including peach and rhubarb, home-made butter caramel (like Dulce de Leche), home-made toasted oats to add a bit of crunch, intriguingly chocolate mint (a chocolate tasting mint plant rather than mint coated in chocolate), and vibrant purple basil along with borage honey. 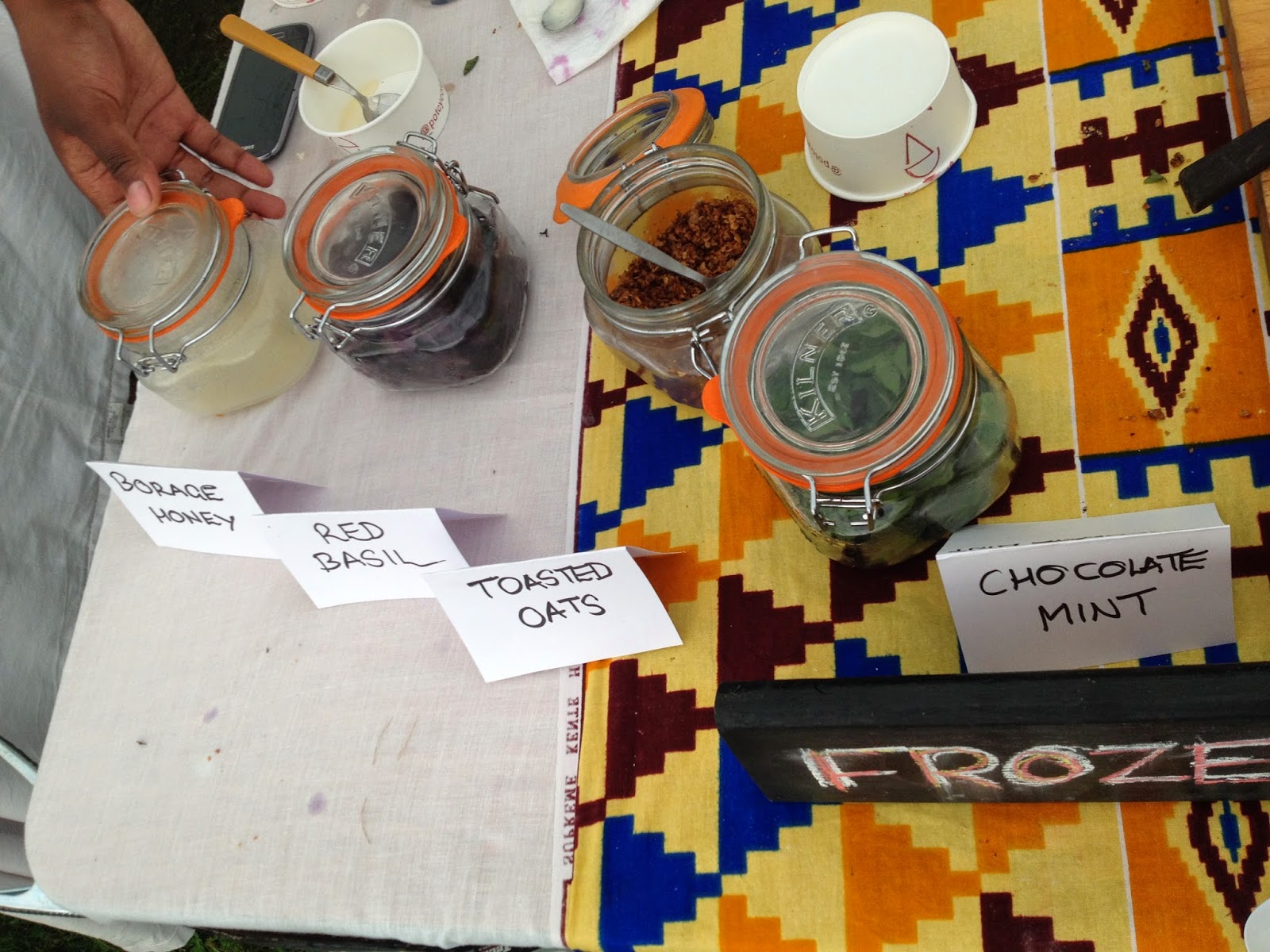 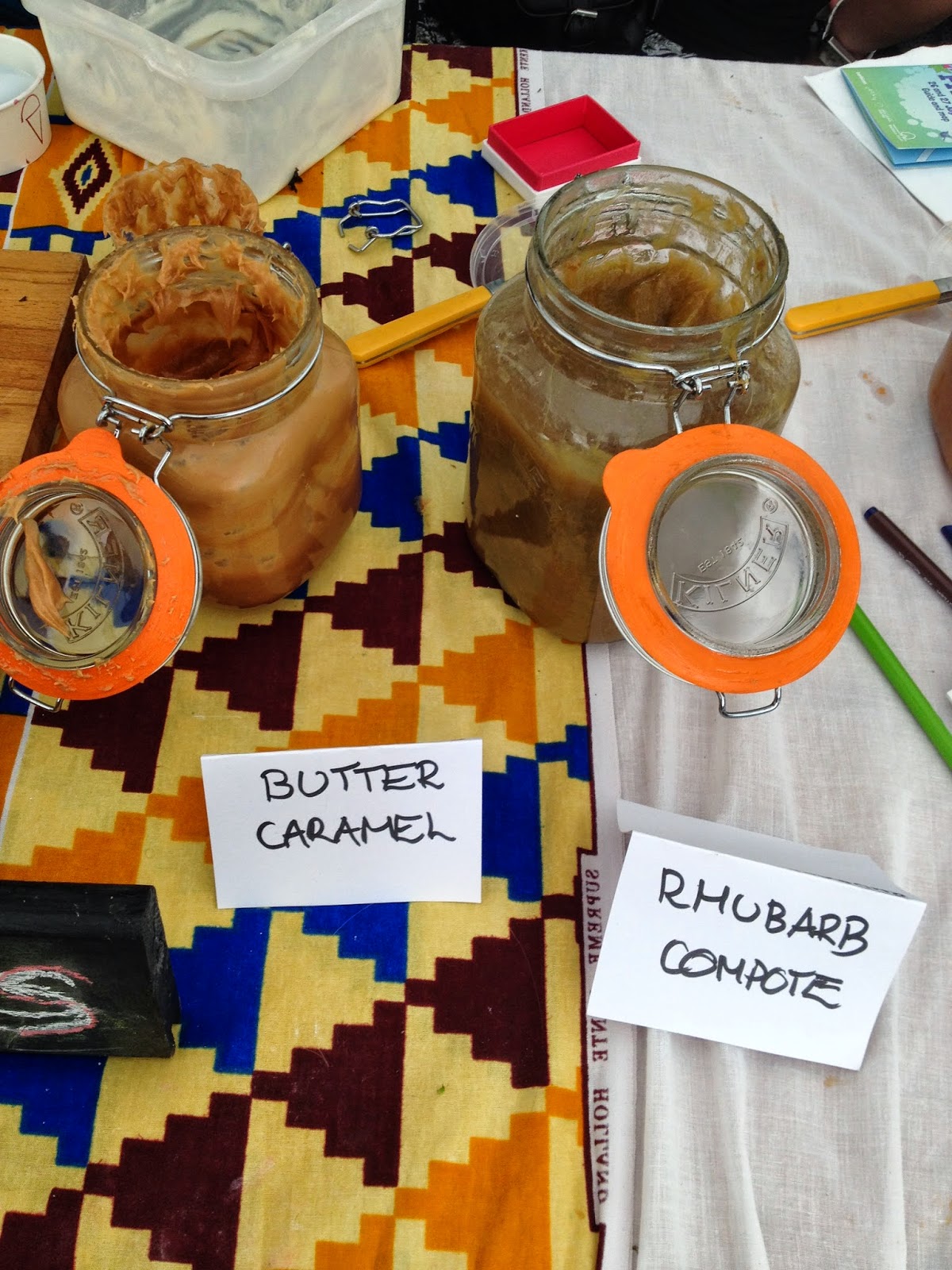 Popsicles also adopted the experimental edge with cucumber and chocolate mint which was very refreshing, even if due to freezer malfunctions it was more on the slushy side than the push out popsicle. 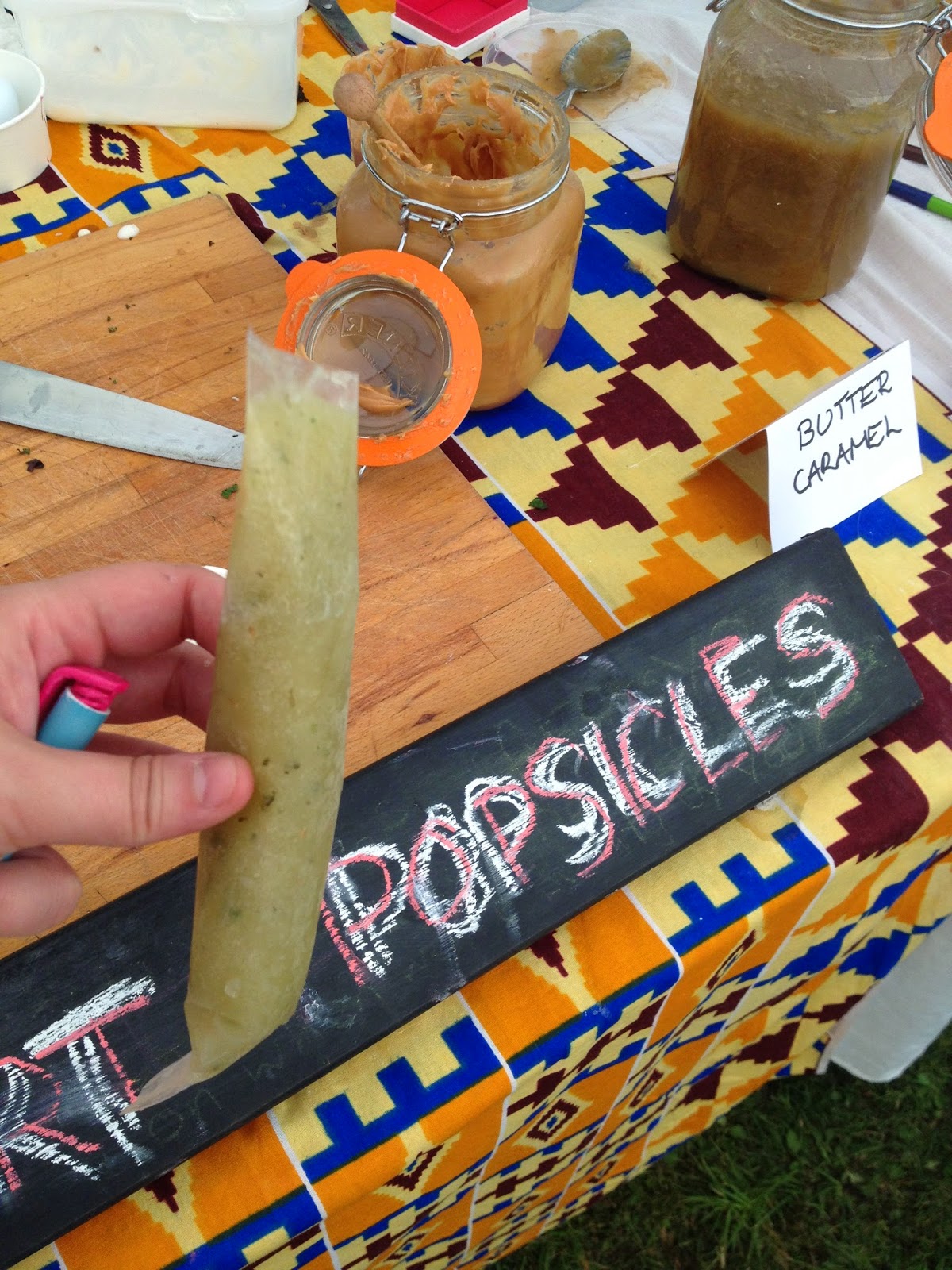 Watch these guys for some interesting additions to your summer sundaes. Their website reveals where the name Potcy comes from. Visit it to find out more: http://potcycoldstore.com/

Along with Artillery Island there are craft stalls, live music and another larger food stalls towards the back. Do come along and support those who work so passionately with pride for their products!

My top tip for if you’re going on Sunday (and you should!)… get there early, bring the suncream and cash and if there’s a queue bear with it as it goes quickly. The Victoria line being down shouldn’t cause too much of a problem as the replacement buses are free and frequent from Seven Sisters to Walthamstow Central.

Hope to see you there!

Eat the Art Trail Post: Top tip for the Walthamstow Garden Party - get there early for food & drink! And a favourite returns…


To mirror the food vanishing fast at the opening party of the E17 Art Trail 2014, the Closing Party food and drink disappeared even quicker!

Having rushed around a gazillion venues on the final day trying to take everything in, my reward was to race to the Closing Party and be greeted with lonely crumbs and empty bottles lining the abandoned trestle tables. It looked a sorry scene. Alas, as Laura, Artillery driving force said, “they descended like a plague of locusts!” 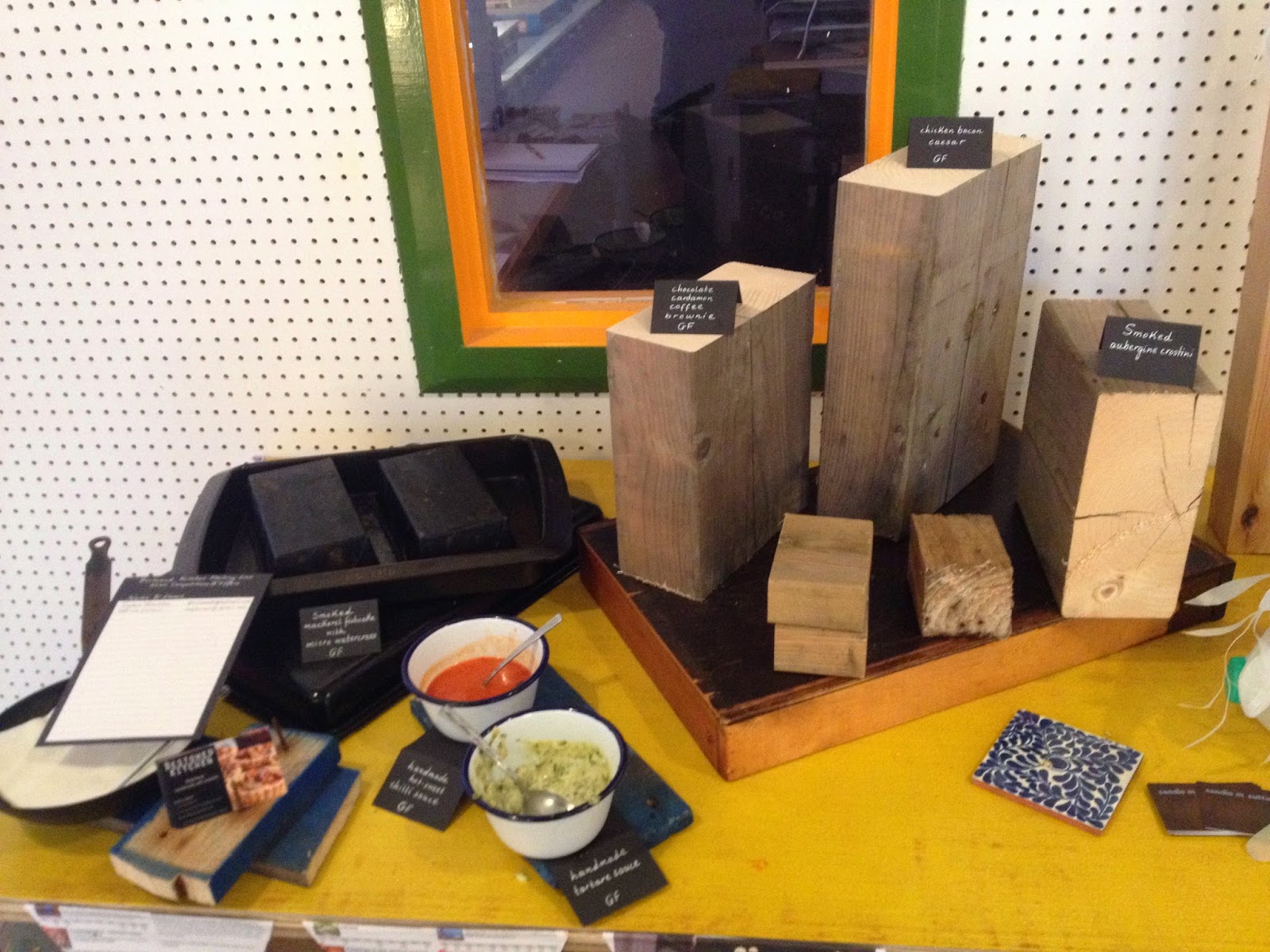 I actually bore witness to this as the final treasured platter of savoury goats’ cheese and caramelised onion cheesecakes fought their way in. As soon as word got out, the magnetic pull was too much and they were once again surrounded. I heard such golden quotes as “do you have catnip in these?”, “can I have another cheeky one… or three” and the cries of dismay as a few accidentally were knocked to the ground in the frenzy! I was glad to have grabbed one for myself! Having never tasted a savoury cheesecake before, the use of digestive biscuits gave a nod towards the traditional bites. Rich and cheesy, they were definitely popular!
Feeling a little down and out, searching my way through the empty specially created bottles of ale to find any sample left, a kind party goer took pity on me and poured a sample for me of her amber nectar into a cup so I could sample it.

The E17 “Art Trail Ale” was specially created by Left Bank Brewery, a brand new venture by Simon Poffney. Now, I’m not an ale expert by any means, but the fact that only a short time into the party and it had all vanished I would take to be a very good sign for Simon. 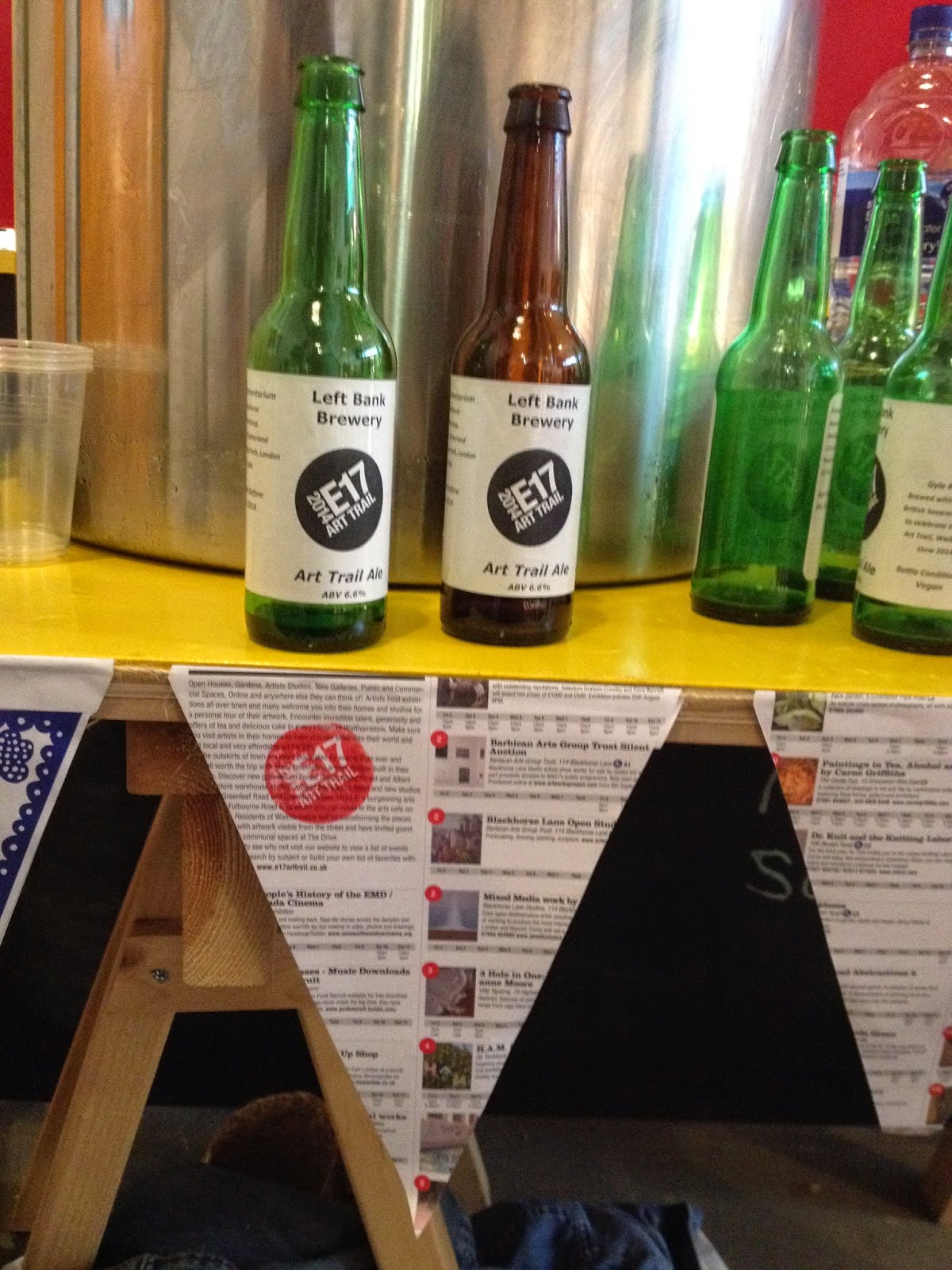 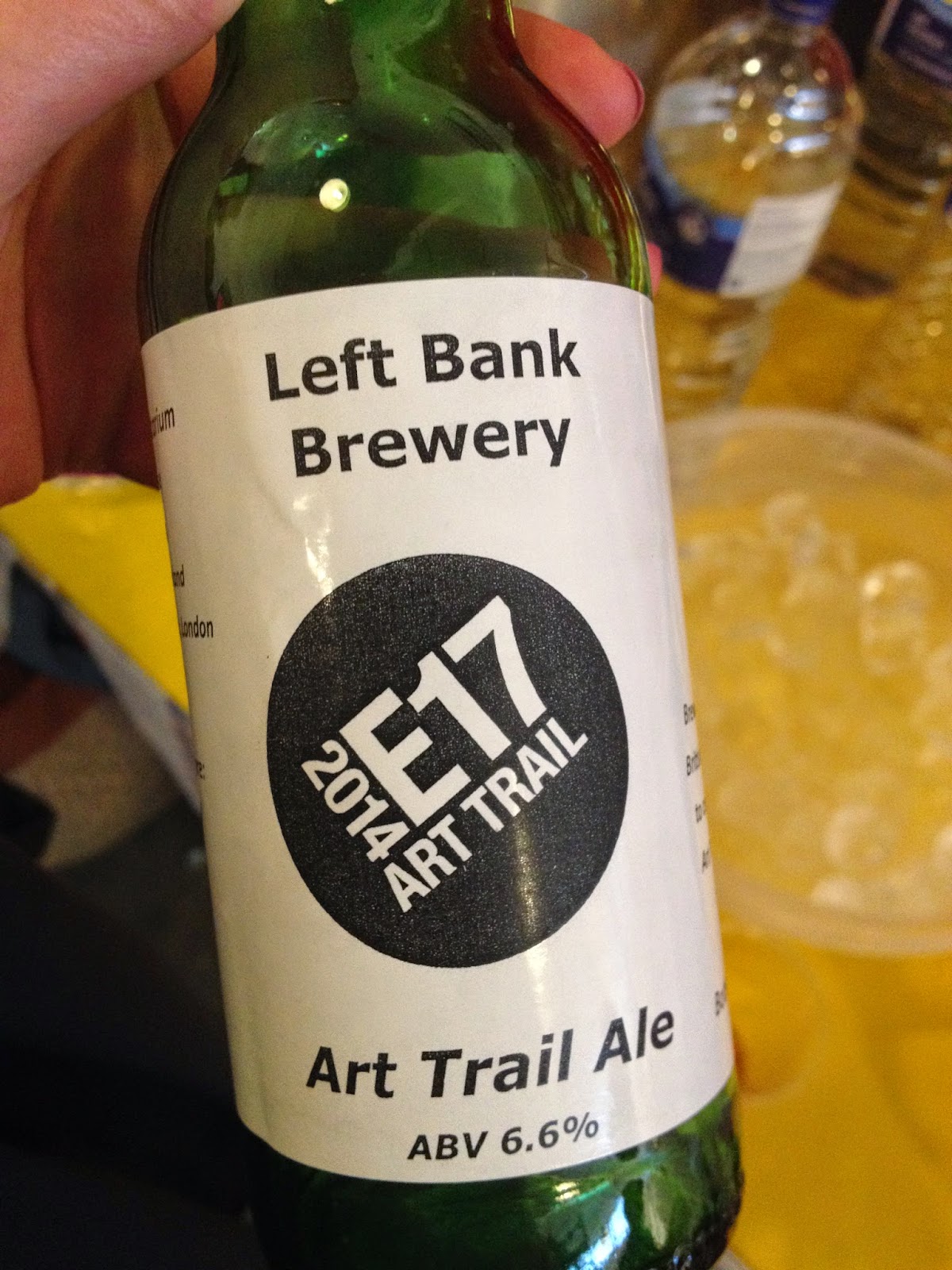 To take my mind off my disappointed tummy, I admired the funky art display of pallets broken down into interesting objects such as chairs, tablets, wine glass holders. 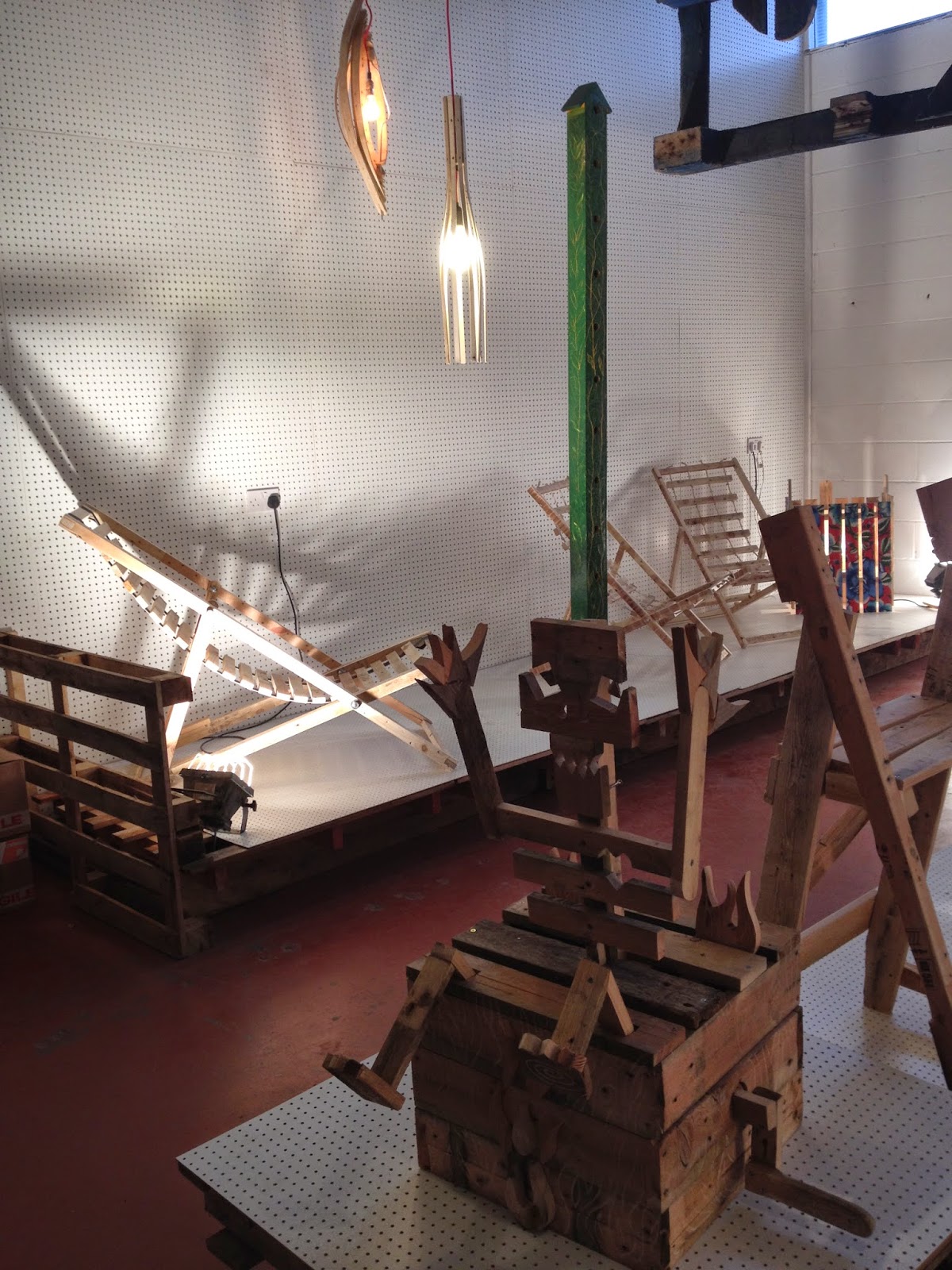 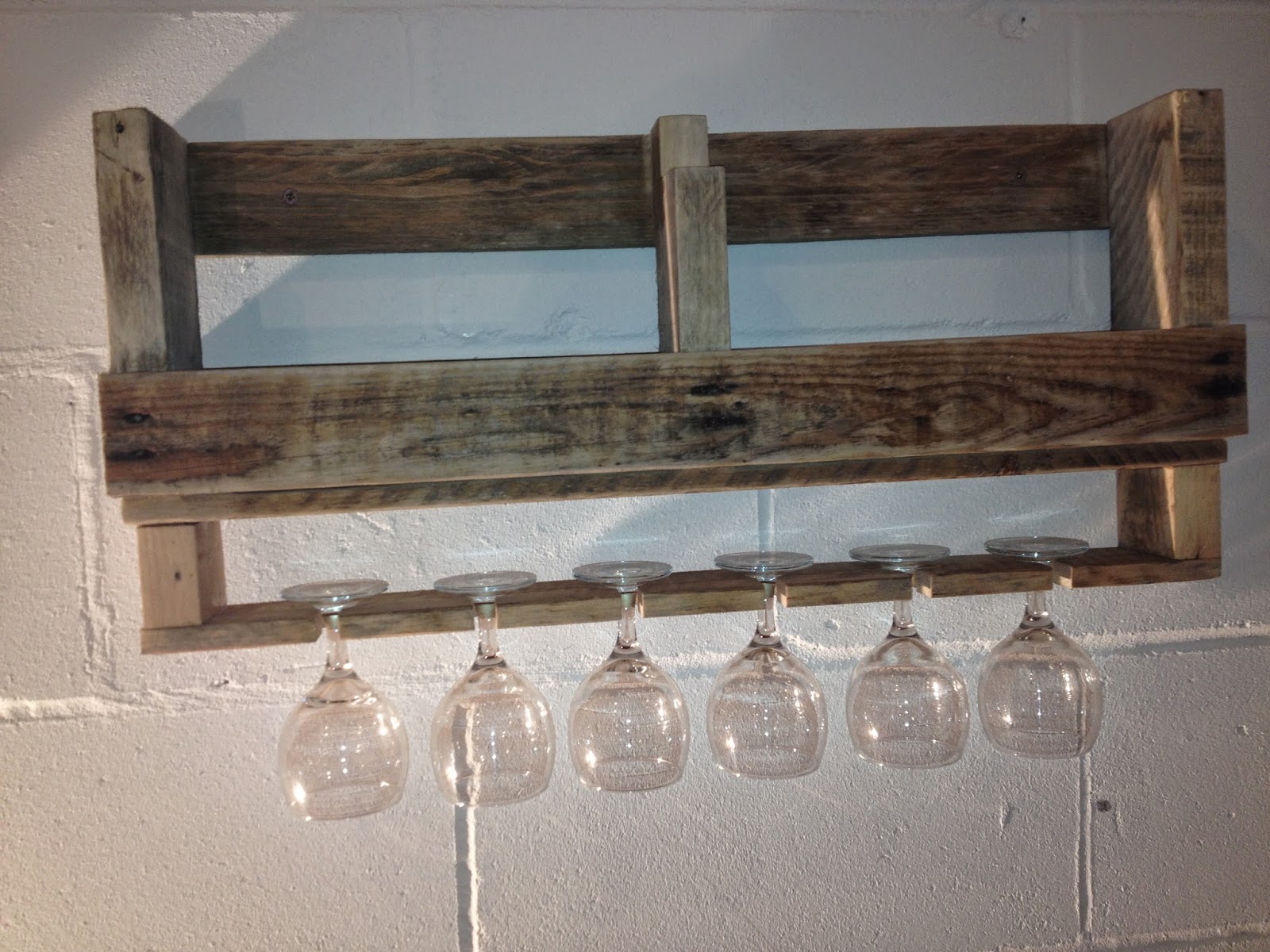 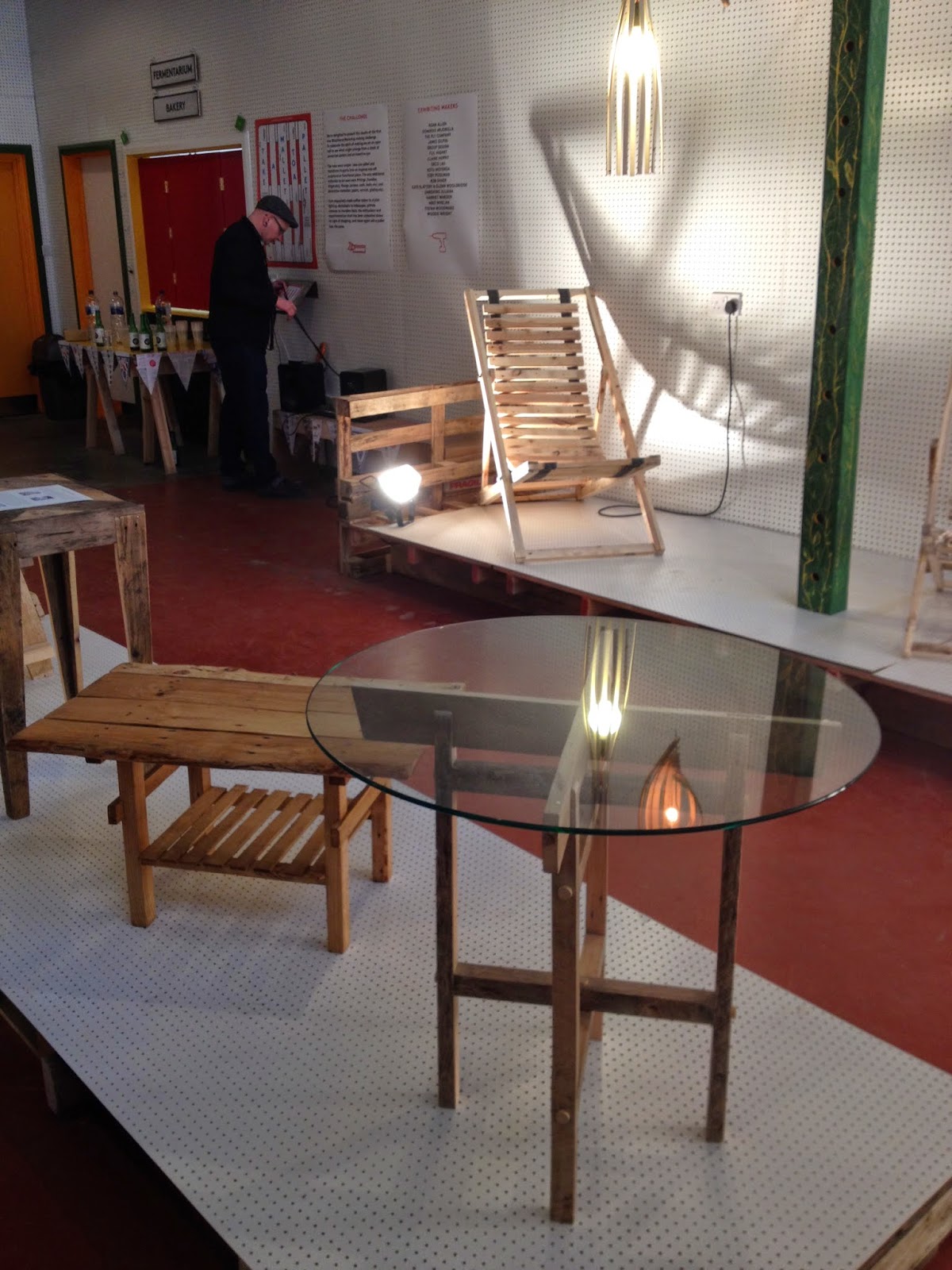 To make up for not having savoured the tempting treats on offer, I decided to find out a bit more about the men who created them:

The drink was created by Simon Poffney from Left Bank Brewery, who told me:
“It was great to have the chance to brew a beer for the Arts Trail.  We went for something strong with a lot of body to reflect the depth of the programme.

“The Left Bank Brewery is one of the projects of the Fermentarium at the Blackhorse workshop. Going back to the roots of brewing in ancient Sumeria and Egypt beer and bread were intertwined as they are here. We have only a 100 litre brew length at present but that gives us the freedom to experiment. We are keen to create beers unencumbered by style rules and look forward to presenting them over the coming months.”

Simon assures me they will be setting up a website soon so you can follow their progress.
The food was provided by local enthusiasts Bestowed Kitchen. In an interview with Jeremy Wood he lets us know of how he got into food and what makes his food special and flying off the platters.

Jeremy says “Bestowed Kitchen is a new food business based in Walthamstow with a desire to share our passion of good food with others. We pride ourselves on quality with everything handmade (bar the bread), even down to the mustard.”

Where possible they use local suppliers including: Bread from a Tottenham based bakery Flourish /http://www.flourishbakery.com and vegetables from Walthamstow based veg shop Veg Hut - https://www.facebook.com/VeghutE17. 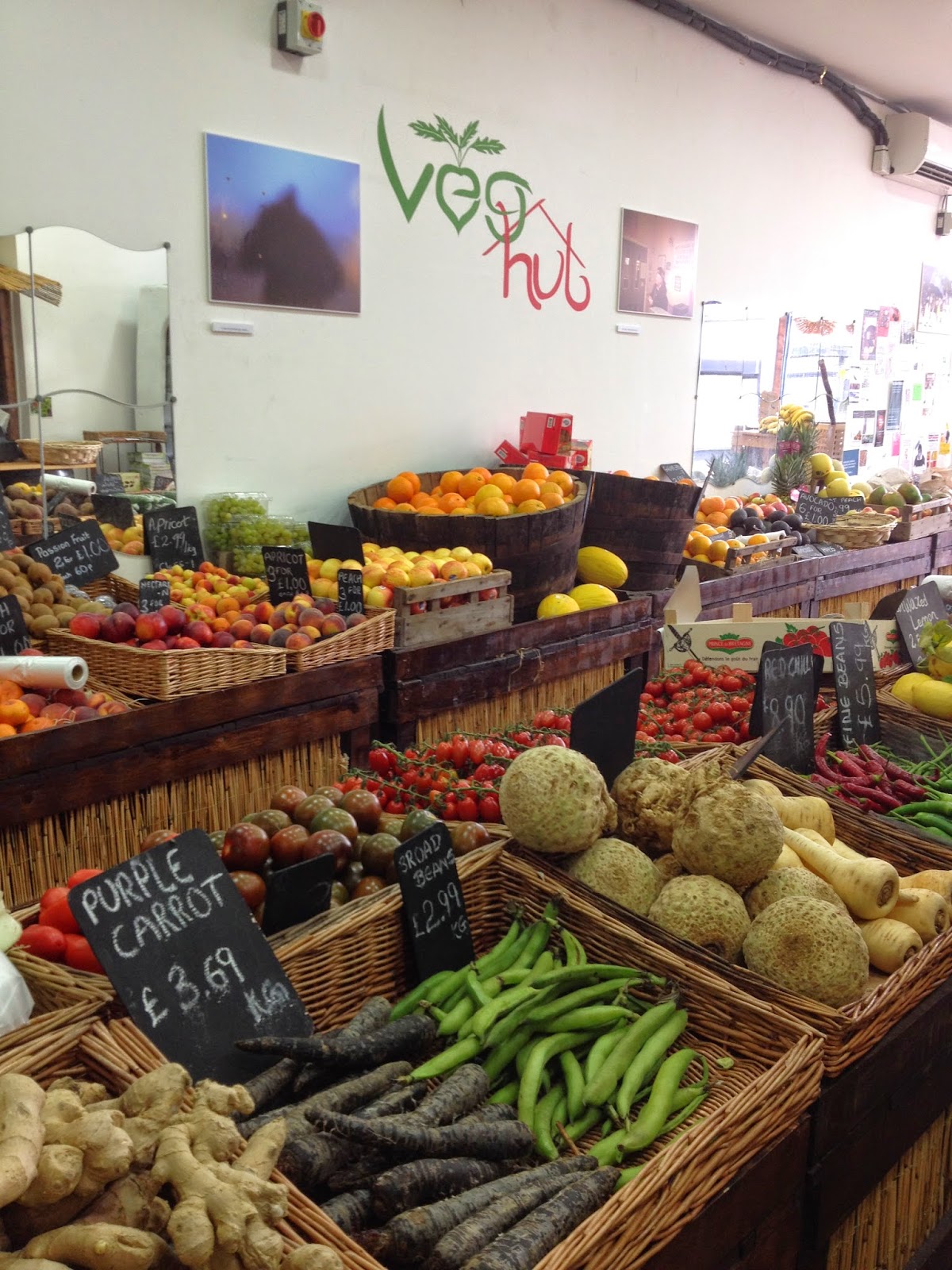 He says “I am a lifelong lover of food. Food is pretty much an obsession for me. I decided that I could no longer ignore this passion and decided to follow it and share it with others. This year an opportunity came up to launch a stall locally in Walthamstow and following this it has led me to help coordinate the organisation of this new market in Walthamstow Village (https://twitter.com/beulahroad). Since launch it has had a positive start and looks set to grow and become established. In a very short space of time lots of opportunities have materialised and it looks like 2014 will be busy!”

He has also been working with the Kitchen at the critically acclaimed cafe-deli in Muswell Hill, Chris Kitch (http://www.chriskitch.com/http://www.theguardian.com/lifeandstyle/2014/feb/23/chriskitch-restaurant-review-jay-rayner) and with Camden’s pop up Brew Bar.

Bestowed Kitchen has confirmed they will be involved with the Walthamstow Garden Party & Summer Appetite Festival on the Sunday. If the previous party was anything to go by, get there early to tuck in.

See what else is happening on Sunday here: http://www.barbican.org.uk/music/event-detail.asp?id=16303&pg=5745
No comments: